Pakistan: 16 killed in car accident in freezing cold for tourists who arrived to enjoy snow 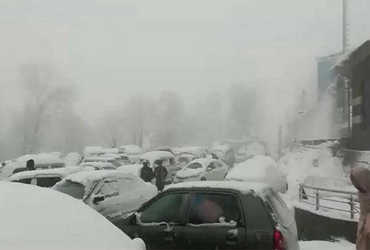 – More than 23,000 vehicles were evacuated from the area a night ago and rescue operations started

At least 16 people were killed in a snow-vehicle collision in Murri in Pakistan’s Pir Panjal range on Saturday. After the incident, Murray Town has been declared disaster-hit. Murri Town is a hill station in Rawalpindi district in the Punjab province of Pakistan. To enjoy the snowfall, there is a huge crowd of tourists. According to Pakistan’s Interior Minister Sheikh Rashid Ahmed, the influx of tourists was so high that a crisis arose.

Sheikh Rashid Ahmed said that the Rawalpindi and Islamabad administrations are working with the police to rescue the stranded people. In addition, 5 platoons of Rangers and Frontier Corps along with Pakistan Army have been called on emergency basis. The minister said around 1,000 vehicles were stranded at the hill station, in which 16 to 19 people died. The local residents of Muri provided food and blankets to the tourists. The administration has closed all the routes to the hill station and only vehicles going for help are being allowed.

According to the Chief Minister of Buzdar, the top priority is to rescue the stranded tourists. Rest houses and other places have been opened for this. The night before, over 23,000 vehicles had been evacuated from the area and rescue operations had begun.