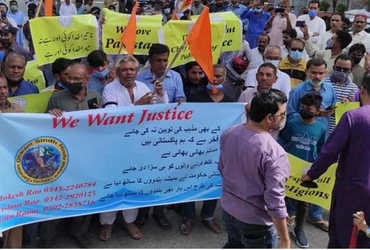 The anger of the Hindu community living in the Rahim Yar Khan area of ​​Pakistan is at its peak after the recent demolition of a temple. Minorities living in Karachi, Pakistan, protested on Sunday against the ongoing atrocities. During this, slogans like ‘Jai Shri Ram’ and ‘Har Har Mahadev’ were raised loudly in Karachi.

People from the minority community participated in a protest outside a press club in Karachi on Sunday. Apart from the Hindu community, Sikhs, Parsis, Christians and others also participated in this. He condemned the recent demolition of the temple and raised his voice against the atrocities on minorities. The protesters also raised slogans of ‘Jai Shri Ram’ and ‘Har Har Mahadev’. Apart from waving saffron flags, he also waved a banner named ‘We Want Justice’.

Ramnath Mishra Maharaj, the chief priest of the famous ancient Hanuman temple in Karachi, was also involved in the protest. He condemned the vandalism of the Ganesh temple by the goons. “Just as those who do wrong against Islam are punished with death or life imprisonment, so should those who harm our religion be punished,” he said. Terror against Hindus has increased in Pakistan at this time.

Ramnath Mishra Maharaj said, “Our Hindu religion is being maligned.” The way Hinduism is portrayed in school books is appalling. The government is requested to take action against such incidents.

Mufti Faesal of Karachi was also involved in the protest. “I belong to Islam but there should be no hate speech between communities,” he said. Even today Muslims are a minority in India and they all live in peace. Many of our relatives are in different parts of India and they are very happy.