Pak Chief Justice expressed displeasure over the attack on the mosque, cutting the nose in the world 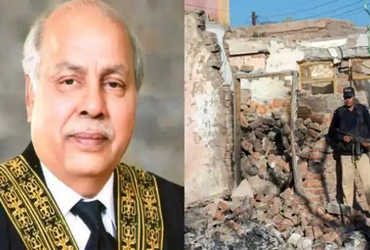 Chief Justice of Pakistan Gulzar Ahmed on Friday reprimanded the Punjab Police chief for attacking and vandalizing the temple. After meeting Chief Patron of Pakistan Hindu Parishad Ramesh Kumar, the Chief Justice took cognizance of the attack on the temple in Bhong village and during the hearing ordered the immediate arrest of the accused involved in the incident. He has also ordered the removal of the policeman who arrested the 8-year-old Hindu boy. The Chief Justice expressed displeasure over the non-arrest of any of the accused so far and also questioned what Muslims would have done if such an attack had taken place on the mosque.

According to the report, Chief Justice Gulzar has expressed concern over the incident and asked the Chief Secretary and IGP of Punjab to appear before the court with the report. The next hearing of the case will be on August 13. During today’s hearing, the Chief Justice expressed displeasure over the incident and slammed the police, saying the attack has seriously damaged Pakistan’s image across the world.

The CJP said that the mob continued to vandalize the temple and the police remained mute spectators. He asked, “What was the police administration doing?” In this regard, IGP Inam Gani told that Assistant Commissioner and ASP were present on the spot. Providing security to the 70 families living near the temple was the priority of the administration. “Terrorism clause has been added to the FIR,” he said.

“If the deputy commissioner and the DPO cannot do their job, they should be dismissed,” the chief justice said. Asked by Judge Qazi Amin about the steps taken by the police so far, IG Inam Ghani said that no arrests have been made so far. Additional Attorney Sohail Mehmood said that PM Imran Khan has taken note of the incident. In this regard, the Chief Justice said that the focus of the incident would be on the legal scenario of the case.

Expressing displeasure over the non-arrest of any of the accused so far, the Chief Justice said, “Three days have passed, but no one has been arrested yet.” Justice Amin also said that the police should do their job. has failed. “If the police had professional officers, the matter would have been resolved by now,” the Chief Justice said. “Imagine what the Muslims would have done if the mosque was attacked,” he said.