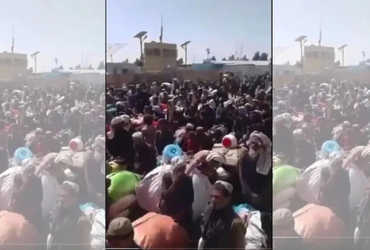 According to a report, more than 1.4 million Afghans have taken refuge in Pakistan.

The whole world was shocked when pictures of people wishing to leave the country caught a plane surfaced at Kabul airport in Afghanistan. A large number of people are fleeing from Afghanistan. Amidst all this, another picture has come out which shows how big the crisis is now.

A video of a crowd of thousands of Afghans trying to infiltrate into Pakistan on the Afghanistan-Pakistan border is going viral. This video is of spin-bald border. People at the border are waiting for the door to open so that they can go and stay in Pakistan.

A journalist named Natik tweeted this video. “It is not the Kabul airport but the Spin Boldak border where there are thousands of people who want to go to Pakistan from Afghanistan,” he said. The situation here is worse than the Kabul airport. But since there is no foreign army stationed here, no one is paying attention to it.

Notably, a large number of people are fleeing Afghanistan since the beginning of the Taliban regime. There are frequent flights from Kabul from which Afghans and foreign nationals are fleeing from Afghanistan.

According to a US report, more than 80,000 people have left the country since August 15. In addition to the United States, NATO countries are also expelling their civilians and Afghan citizens. Rescue mission is also being run by India.

Pakistan is in the neighborhood of Afghanistan and the border between the two countries is very close to Pakistan, which is putting more pressure on Afghan citizens. According to a report, more than 1.4 million Afghans have taken refuge in Pakistan.