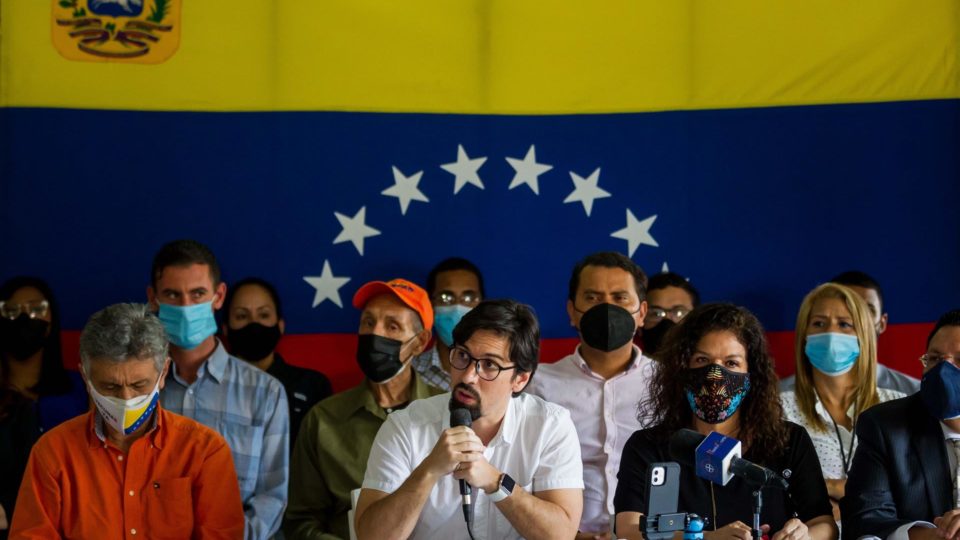 Former Venezuelan opposition MP Freddy Guevara speaks at a press conference in Caracas on August 31. The opposition to the Maduro regime has decided to participate in the next regional elections in Venezuela | Photo: EFE / Miguel Gutierrez

Opposition to the Venezuelan dictatorship, including the wing led by Juan Guaidó, announced on Tuesday that it would run in regional elections scheduled for November 21, after refusing to participate in the legislative elections in December last year, given the fraudulent process.

“We are announcing to the national and international community our participation in the regional and municipal process of November 21, 2021, with the acronym of the Table of Democratic Unity (MUD)”, indicates a statement from the unitary platform, which brings together the main opposition. parties, read at a press conference in Caracas.

Opponents said in the text that they know that these elections “will not be fair or conventional”. “The dictatorship has imposed serious obstacles that endanger the expression of change of the Venezuelan people,” they say. However, they stressed that this electoral process will be “a useful battlefield” to promote the solution of the “serious crisis in our country: free presidential and legislative elections”.

The opposition did not participate in the 2018 elections, which gave dictator Nicolás Maduro another term, nor in the 2020 legislative elections, two electoral processes considered fraudulent by the Venezuelan opposition and much of the international community. .

The act brought together several opposition leaders, such as Henry Ramos Allup, leader of the Social Democratic Action Party (AD), and Tomás Guanipa, of the First Justice (PJ), including two-time presidential candidate Henrique Capriles is integral.

On June 29, the National Electoral Council of Venezuela (CNE) authorized the MUD coalition, disabled since 2018 and the largest opposition coalition to the regime of dictator Nicolás Maduro, to participate in the elections.

The unitary platform made the decision to run in the November elections “after a long and difficult process of internal deliberation involving local, regional and national leaders”.

“We are delighted with the difficult situation our country is going through, with the sense of urgency to find permanent solutions to our problems and with the aim of strengthening unity,” the statement said.

The decision to go to the polls “complements the efforts made in Mexico”, where representatives of the dictatorship and the opposition have started negotiations “and aim for a peaceful and negotiated solution,” the statement said.

Capriles had previously shown support for opponents to go to the polls on November 21, but Guaidó had been reluctant to do so.

After the opposition’s announcement, Juan Guaidó, former president of the National Assembly, demanded guarantees for “free and fair” regional elections in November in Venezuela.

Dictator Nicolás Maduro reacted sarcastically to the announcement of the opposition’s participation in the elections. “I will sit in my chair, turn on the television and watch Guaidó vote on the 21st, and I will applaud because we have succeeded in including him in democracy,” he said in an act on Tuesday.

Guaidó responded to the provocation, referring to the ongoing negotiations in Mexico. “Mature: be serious. We all know that today there are no conditions or guarantees for a free and fair election. So much so that you are sitting in return in an international negotiation process which seeks these electoral and political guarantees and an electoral calendar. ” .

The second meeting between the dictatorship and the Venezuelan opposition in Mexico City is scheduled for Friday, September 3. The dialogue is mediated by Norway. A group of friendly countries participates in the dialogue, and Russia participates as a country accompanying the Maduro regime, while the Netherlands accompanies the opposition delegation.

Dictator Nicolás Maduro said on Tuesday it was “worthy of applause” that the Venezuelan opposition has taken the decision to contest the regional and municipal elections on 21 November.

“I ask for applause for the G-4 (group of the four largest opposition parties) and for its announcement I ask for applause, because it deserves to applaud the political gesture of participating in the elections,” Maduro said during of an event. of the United Socialist Party of Venezuela (PSUV) broadcast by the state channel VTV.

Maduro said the November 21 elections would be “a total triumph of the Chavista political culture”, which he described as “democratic and inclusive”.

“No one will ever be able to dream of taking power without first going through the ballot box, because the problems of Venezuelans (…) we will solve them ourselves”, he declared.

For the dictator, popular sovereignty “has once again imposed itself and will impose a great victory on November 21”, because “a cycle of political stability which should last at least until 2030 has opened”.

Also according to Maduro, the participation of the opposition in the elections was possible thanks to the mediation of the president of the Parliament and head of the delegation of his regime in the negotiations with the opposition, Jorge Rodríguez. “He convinced them, on my behalf,” he said.