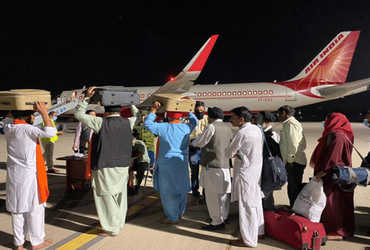 New Delhi: Operation Devishakti has been termed as a massive relief operation to rescue Indians trapped in violent Afghanistan. The special reason for choosing this name is that there is an attempt to save innocent civilians from violence. Just as Maa Durga saves the innocent from the demons, similarly a campaign has been started to save and evacuate the innocent from Kabul. Thus Operation Sankatmochan was launched in Sudan to evacuate Indians. Prime Minister Modi has named this operation.

It is noteworthy that Prime Minister Narendra Modi is a devotee of Maa Durga. Both of them fast for ninety nine days in Navratri. During this he drinks only hot water. Sometimes fruit eaters do the same.

At the CCS meeting, Modi pointed to the cabinet that the repatriation of people from Afghanistan should be viewed from a humanitarian point of view. Therefore, along with bringing minorities like Hindus and Sikhs to India, Afghans who want to come to India should also be brought to India. No stone should be left unturned in bringing these Afghans to India.

India on Tuesday brought in four Indian nationals and eight Afghans, including Sikhs and Hindus, from Dushanbe, after the Taliban evacuated the besieged Tajik city of Kabul. With the number of people returning on Tuesday, the number of people returning to India has increased to 200 since August 15. The first batch was airlifted after the Taliban took control of Kabul.