One killed in firing by unidentified attackers at Kabul airport 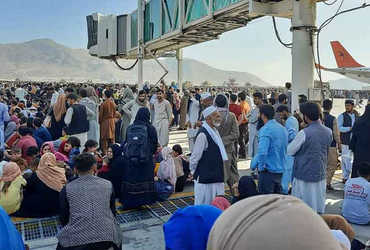 Kabul Ta. 3
Unknown assailants opened fire at Kabul airport, killing an Afghan soldier. There was chaos at the airport and the situation became uncontrollable.
The German army claimed that the situation had become out of control after the firing at the Kabul airport. Citizens of different countries gathered at the airport to go home. At that time unknown people opened fire.
An Afghan soldier was killed in the shootout. The firing caused panic at the airport and created an atmosphere of chaos. The German military claimed that the attack was not carried out by the Taliban, but that strangers were involved. However, the shooter has not been identified.
The Taliban, on the other hand, claimed to have regained the three districts it had lost earlier. Afghan fighters forced the Taliban to withdraw from three districts. Vice President Amrullah Saleh announced his presidency and mobilized Afghan fighters in his Panjshir area.
The terrorists drove the Taliban out of the northern region. Following the incident, a Taliban spokesman has now claimed that the three defeated districts have been recaptured by the Taliban and that Panjshir will be besieged and recaptured soon.