Once upon a time, Afghan women roamed the streets of Kabul freely 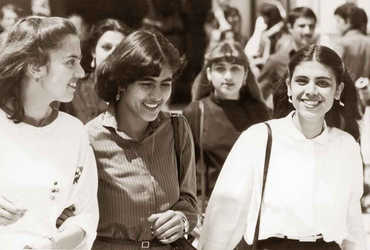 After two decades of Taliban occupation of Afghanistan, the condition of Afghan women is going from bad to worse. No one has forgotten the atrocities committed on women by the Taliban rulers in the past. However, it would be surprising to know that Afghan women had a lot of freedom in the days before Taliban culture did not develop in Afghanistan. The streets of Kabul were free for women. The beginning of the era of modernization of Afghanistan in 190 AD. Historical experiences were not good, so the then Prime Minister Mohammad Dawood voluntarily expressed his desire to wear the veil or not, but women were encouraged to move forward in the field of health and education. The life of Afghan women in the 180s was very glamorous. Once upon a time there were Gurvi fashion shows.

Under the 18th Amendment of the Constitution, women were given a place in education and politics. The People’s Democratic Party of Afghanistan (PDPA) formed a socialist organization supported by the Soviet Union. According to one source, 5,000 women were enrolled in higher education institutions in Afghanistan in the 1980s. 2.50 lakh girls were studying in nearby schools. There were 150 female professors and 4,000 female teachers. Women were also recruited into the science, medicine and civil services. Although girls were getting married at a young age, they were rapidly entering the male dominated sphere. Afghan boys and girls used to hang out in theaters and universities together.

The Soviet occupation of Afghanistan by the Soviet Union in the 19th century lasted for a decade. With the help and support of the United States, Pakistan, Iran and Saudi Arabia, the radical Mujahideen fought against the Russian army. The Mujahideen feared that the traditional culture of Afghanistan was under threat. The Soviet Union withdrew from Afghanistan in the 19th century, but the Mujahideen captured Kabul with a strong army and declared it an Islamic state. A civil war broke out against Taliban leader Gulbuddin Hekmatyar Najibullah. Hundreds of women were abducted, raped and murdered in a four-year class war. The Taliban eventually invaded Kabul in which most of the Taliban leaders, including Mullah Omar, were poor villagers educated in neighboring Wahhabi schools. Before the Taliban regime, a large number of women were in charge of education. Restrictions on the employment of women started having an adverse effect on the education of children. Mandatory burqa was introduced for women.

Al Qaeda commanders kidnapped hundreds of women as part of a human trafficking network and sold them into prostitution and slavery in Pakistan. The only way for women to escape the atrocities of the Taliban was to hide. Jigarbaz educated women ran schools in a secret location amid the fear of the Taliban and taught subjects such as biology, chemistry, English, theology, gardening, sewing and weaving. The Taliban tortured several women caught teaching. Twenty years later, the Taliban regime is once again abusing women by taking them hostage. Even so, owning one is still out of reach for the average person.