Once again rockets exploded at Kabul airport, fire broke out in many places amidst a plume of smoke 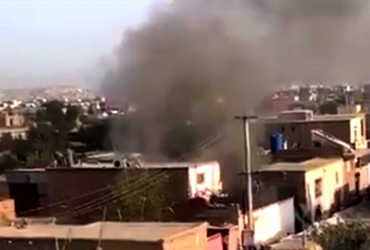 American troops are about to leave Kabul by August 31, before which an alert has been issued for Kabul Airport and surrounding areas.

Rockets struck again on Monday morning in Kabul, Afghanistan. The attacker struck near the Kabul airport at 6:40 am. According to preliminary details, the rocket was targeted from a vehicle.

Third footage- rockets were fired through this vehicle towards Kabul airport pic.twitter.com/ACCe7IFANj

According to local media reports, the rocket was fired from a vehicle near the airport near Kabul Airport. The Kabul Air Field Defense System destroyed several rockets.

The US military is scheduled to leave Kabul by August 31, before which an alert is issued for Kabul Airport and surrounding areas. Earlier in the day, a terrorist attack on Kabul airport killed hundreds of people, including 13 US soldiers.

After this, the US launched an airstrike targeting ISIS-K terrorists in Kabul. Common people also lost their lives in the strike on Sunday. However, an alert had already been issued by the US that by August 31, there could be several attacks on the Kabul airport.