No party in Chile will have a majority in Congress; negotiating will be key to governing

No party in Chile will have a majority in Congress; negotiating will be key to governing 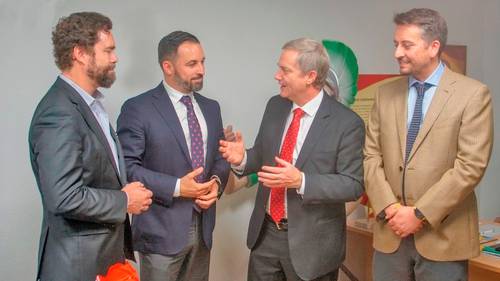 ▲ The president of the far-right Spanish formation Vox, Santiago Abascal, and the pinochetista José Antonio Kast (both in the center) in a file image, meeting in Madrid Photo Europa Press

Santiago. The day after the presidential elections in Chile, which sent the ultraconservative / Pinochetist José Antonio Kast (27.91 percent of votes) and the leftist deputy Gabriel Boric (25.83) to the second round, both candidates rushed to define strategies. to attract the 3.8 million votes that went to five other candidates behind.

Kast, from the Christian Social Front, obtained one million 961 thousand votes, compared to the million 814 thousand of Boric, standard-bearer of Approve Dignity (AP); a difference of 146 thousand. A little less than half of the authorized registry voted, that is, there are another 8 million people to talk to.

The first scores began on Sunday night, when both in their speeches launched messages of moderation and willingness to adjust their programs, incorporate ideas and / or proposals from the most similar candidates.

The Socialists immediately declared their adherence to Boric without conditions, as did the Party for Democracy; On the other hand, the Christian Democrats will analyze it in a next national meeting, but clarified that it will not give blank checks. In the ruling right wing, the Independent Democratic Union (UDI) quickly announced that it is square with Kast; two other groupings will surely do as well.

But the one who appears as a great faithful of the balance is the electorate of Franco Parisi, candidate of the People’s Party who obtained 899 thousand votes (12.8) to arrive third, despite being absent from the country and who campaigned virtual from the United States, where resides. Analysts are trying to decipher that voter, described as refractory to politics and belonging essentially to the lowest income sectors.

According to the sociologist Carlos Ruiz, from the Nodo XXI Foundation, what happened to Parisi is “an anti-establishment reaction; it is something similar to what the People’s List was in its heterogeneity and inorganicity and later in how ephemeral it ended up being. It is an eminently organic phenomenon, a very circumstantial vote ”.

The People’s List were the independent candidates that stormed in May to win 27 seats in the Constitutional Convention. Basically conformed by anti-party discourse, they quickly entered a diaspora that was diluting them.

Regarding whether that vote will be available, Ruiz says that “it is not clear which way he will go; Much can go to the home because it is eminently anti-establishment and much can go anywhere. So it is a complicated subject to capture and I don’t think he can sell it as if he had it tied up. “

Mauricio Morales, an academic at the University of Talca, says that Parisi’s vote is very diverse and difficult to capture on the left-right axis. According to some polls, his base of support would go almost by halves to both candidates in the second round. However, the feeling remains that it tends to be more inclined to candidacies from the right than from the left. Their electoral base is predominantly male and under 50 years old, belonging to middle socioeconomic strata. His behavior is anyone’s guess but, at least now, the balance is tilted toward Kast.

Claudio Fuentes, an academic at the Diego Portales University, describes them as follows: “We know that this voter is not a militant. Surely it is a voter who has an acid criticism of the parties and the establishment (political actors, businessmen or everything that smells of the elite). Many of them will surely hesitate to participate in the second round. They are independent and skeptical of anything that resembles an elite agreement. For this reason, it will not be easy in the coming weeks to approach those voters. But if there is someone who can come closer to this type of profile, it is precisely José Antonio Kast ”, he stated in an article on the Tercera Dosis portal.

From the People’s Party, a spokesperson announced that they will carry out a vote among their 40,000 militants, to decide what course to take in the second round, either to decide some support or to give freedom of action.

The pollster Activa Research characterized them as: 66 percent of the C3 and D social strata, that is, poor; 64 percent male; 80 percent without a defined political position; He added that 26 percent will not vote in the second round; 28 percent will do it for Boric and 26 for Kast.

As for what went wrong in Boric’s candidacy, Morales says that the problem was not him, but his environment.

The team that surrounds it does not give guarantees in any dimension associated with governance. The economic program has been criticized for the lack of financing to support the policies it offers, which presents a serious deficit in the handling of figures. The role of the PC also hurt and now that the candidate needs to move towards the center, he will have to reduce his role, he says.

Also on Sunday there were parliamentary elections that renewed all 155 deputies and half the Senate (27). The result made it clear that the future government, whatever it may be, will lack majorities to impose itself and that it will have to negotiate its projects and reforms.

From March, the Chamber of Deputies will have 37 members from Approve Dignity, 36 from Nuevo Pacto Social (the former Concertación), 53 from the ruling Chile Podemos Más, 15 from the Christian Social Front, seven from the People’s Party and six independents. That is, 73 opponents, 68 ruling party and 14 from different forces. And in the Senate, 23 from the ruling party, 22 from the opposition and five independents.

With this distribution, governance will be in question.