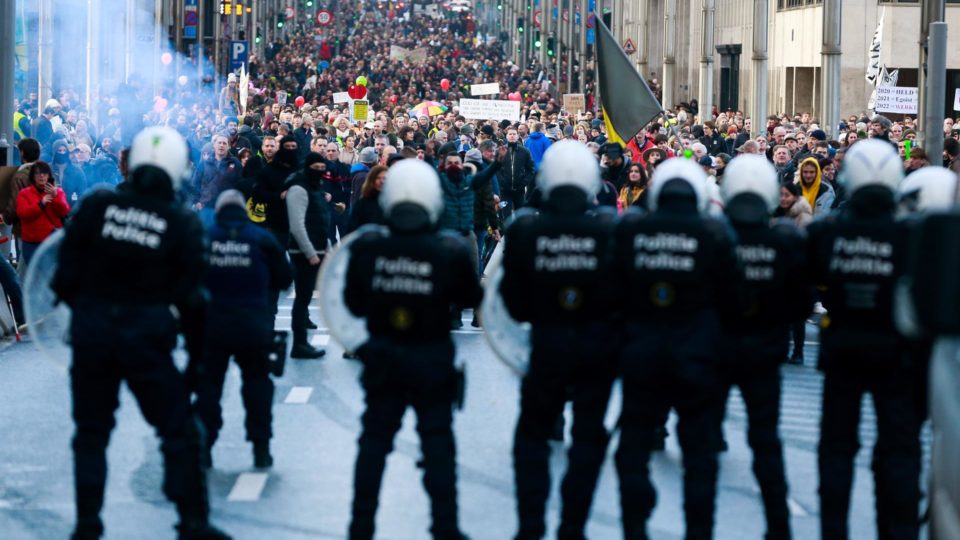 Riots broke out in the Netherlands and Belgium, during protests against the return of restrictions to deal with the Covid-19 pandemic in both countries.

In The Hague, the Netherlands, during Saturday night protests (20) in which clashes with protesters took place, riot police used water cannons and five policemen were injured, according to CNN . One of them was hospitalized with a concussion and two suffered hearing damage from fireworks.

Police reported that some of the demonstrators started fires, carried out depredations, assaulted drivers and threw stones and fireworks at police officers; 19 people were arrested.

On Saturday there was a peaceful march in the capital, Amsterdam. The Dutch public broadcaster NOS also reported riots in the city of Urk and towns in the province of Limburg. On Friday (19), clashes also took place during demonstrations in Rotterdam.

In Brussels, this Sunday (21), there was an outcry at the end of a demonstration against the restrictions on the Covid-19 confrontation: according to the Associated Press, some of the demonstrators clashed with police, vandalized cars and set dumpsters on fire. Police responded with tear gas and water cannons. The number of injuries and arrests has not been communicated.

Last weekend, the Dutch government ordered the closure of non-essential stores at 6 p.m. and hotels, supermarkets and pharmacies at 8 p.m., in an effort to combat the increase in Covid-19 cases. The measures will apply until at least December 4 and will require people in bars, terraces and restaurants to remain seated at all times.

Hairdressers, sex workers and massage therapists, as well as non-essential businesses, must stop providing services after 6 p.m. In universities and training centers, the maximum number of students per class is 75, a measure that is not applied in the case of a test.

Likewise, the Covid pass is maintained for access to hotels, cinemas, theaters, swimming pools and gymnasiums, as well as the use of masks in supermarkets, non-essential stores, public transport and official buildings.

The government has urged companies to implement teleworking wherever possible and has recommended that the population limit visits to four people per household and restore a safety distance of 1.5 meters in places where a pass. Covid is not required.

If someone is positive, quarantine is applied not only to the infected person, but also to the rest of the people who live with the patient. Sporting events have closed the doors again, including all matches in the Dutch football championship.

In Belgium, the government last week tightened measures to try to fight a fourth wave of coronavirus infections, with a return to mandatory teleworking four days a week and the reintroduction of widespread use of masks.

The country’s authorities have also confirmed that a booster dose of the Covid-19 vaccine will be administered to the entire population. There was also an agreement at the federal level on compulsory vaccination in the health sector from January 1.

The other main measure is the extent of the use of masks, which have become compulsory in establishments or places of entertainment. They are mandatory even if a so-called Covid passport has been presented at the entrance, which proves that a person has been vaccinated, tested negative on a PCR test in the last 48 hours, or has recovered from the disease.

The measure concerns restaurants, cinemas, museums, concert halls, theaters and other cultural establishments, as well as public or private events of more than 50 people inside or 100 people outside.

In addition, the minimum age for those who must wear a mask has been reduced from 12 to 10, although regional and local authorities can decide how to proceed in schools.