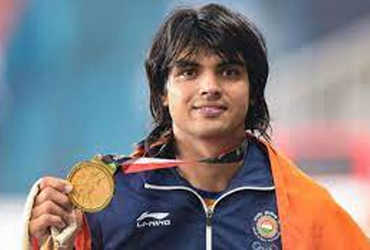 Neeraj Chopra won gold in javelin throw with a throw of 87.58m: Pride with pride

Neeraj Chopra is the second Indian after shooter Abhinav Bindra (2008) to win an individual gold.

Abhinav Bindra had earlier won a gold medal in shooting in 2008. India has won eight gold medals in hockey but it is called a team event. Incidentally, the javelin throw was the last event for India and India won the gold medal and finished the campaign with a happy, historic seal.

Given the performance of the last few years as well as their dominance in the sport, India PV like Sindhu (badminton), Bajrang Punia (wrestling) and Neeraj Chopra (javelin throw) hoped to win gold medals. Could win gold medal with record and ranking in archery. Neeraj Chopra maintains the consistency of his Asian Games, World Junior Commonwealth throw meter.

He qualified for the Olympics but threw the longest distance (86.59 m). Neeraj Chopra, 23, entered the first Olympics of his career and achieved this feat.

Czech Republic’s Jakob Wadlach (86.67) in second place and Vitszev Veseli (85.44) in third place. In the second throw, Neeraj scored 87.58m which none of the opponents could surpass.

The German waiter was the only player out of all the rivals which was a concern for Neeraj before the event as Vetter has covered distances of more than 90 meters several times in his career. But today was a flop at crucial times. The news of Neeraj Chopra winning the gold medal had created an atmosphere of celebration and congratulation across the country.

The social media platform was also flooded with the achievements of India and Neeraj. Prime Minister Modi spoke to Neeraj Chopra over the phone and congratulated him. P.T., who missed out on a medal in the 1984 athletics event. Congratulating Neeraj, Usha said that my unfinished dream has come true.

Neeraj ended India’s gold medal drought in track and field. This gold medal will continue to inspire lakhs of youth of the country.

Neeraj created history in Tokyo Olympics. What a great game show. The whole country is proud of this success. best wishes for future

The country will never forget this day. Neeraj showed a strong game till the end. I spoke to Neeraj and greeted him. This is the result of his hard work and talent.

Olympic gold is the biggest achievement in the field of sports. Neeraj I am sure this gold medal from Neeraj Chopra will inspire other Indian players as well.

Neeraj created history Neeraj has made the countrymen proud by winning the gold medal.

Blessed are the parents who gave such a grandson to the country. Congratulations to Neeraj, grandson of Haryana for hoisting the tricolor in Tokyo for the gold medal.

Weldon Golden Boy! India’s Olympic history was rewritten today. Neeraj’s name has been etched on the pages of history forever. Thanks a lot Best regards.

Neeraj, thank you for making your country’s dream come true. Welcome to the Gold Club.

Neeraj threw a spear like a sun in the country. It was a memorable moment for Indian sports.

‘Wanted to meet Milkha Singh with a gold medal’

Milkha Singh, who had lost a medal in the 1960 Rome Olympics with a time of 0.01 s, was completed by Neeraj after his death.

Tokyo: Neeraj Chopra, India’s first Olympic gold medalist in athletics, presented his gold medal to the legendary athlete Milkha Singh. Milkha Singh, who expressed her last wish to an Indian athlete to win a gold medal at the Olympics, passed away on June 18.

Neeraj said, ‘I wanted to meet Milkha Singh with a gold medal. Legendary Indian athlete Milkha Singh missed out on a medal in the 1960 Rome Olympics by a time of 0.01 seconds. After which he said in many interviews that the last wish of his life was that an Indian athlete would win a gold medal in the Olympic athletics competition. Of course Milkha Singh’s last wish could not be fulfilled during his lifetime and he died on 18 June.