Nature’s roar amid terrorism in Afghanistan: 150 killed in devastating floods 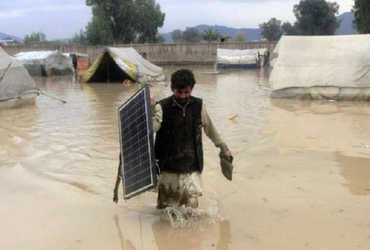 Kabul, Ta. 20
There has been heavy rain in the mountainous province of Nuristan in Afghanistan. The flood killed 150 people and left many missing. Relief work could not start as the flood-hit area was under the control of Taliban militants.
Taliban extremists have created a furore in Afghanistan. The Taliban have started capturing one area after another in Afghanistan. In the midst of such a dire situation, the care of nature has come to an end. Millions of people have been affected by devastating floods in the mountainous provinces of Afghanistan.
Taliban spokesman Zubinullah Mujahid said the mountainous province of Nuristan has been raining heavily for several days. This has caused severe waterlogging in rural areas of the state. Devastating floods have swept away villages and killed at least 150 people. According to the Taliban, many people are still missing in the area and the Taliban is trying to find them.
The Taliban claimed to have allocated 5,000 for rescue operations across the region, but this was questioned by the Afghan government. A spokesman for the Kabul-based disaster management department called on the Taliban to save as many people as possible if rescuers were allowed to enter the flood-hit area for relief operations. However, the Taliban did not show a willingness to seek the help of the Afghan government.
The Taliban said a rescue operation had been launched with the help of local people. The big question is how the rescue operation will be possible. About 100 houses are reported to have collapsed in Nuristan province. Some charitable organizations working in Afghanistan have started relief work. Distribution of food packets has also been started in the flood affected areas. The search for the missing has been started.