Natural disasters on the rise due to climate change: experts 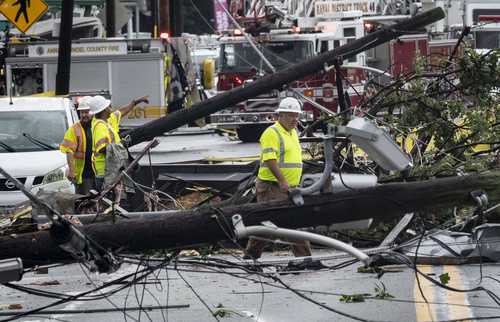 ▲ Maryland public service employees assess the damage left by a tornado in Annapolis, formed in the aftermath of Hurricane Ida. Afp photo

Geneva. Climate change and increasingly extreme weather events have caused an increase in natural disasters in the last 50 years with a disproportionate impact on the poorest countries, reported yesterday the World Meteorological Organization (WMO) and the United Nations Office for the Disaster Risk Reduction.

Not all is bad news, according to both agencies, noting that thanks to the improvement of early warning and disaster management systems, the number of deaths from these phenomena has been almost three times lower.

According to the WMO Atlas of Mortality and Economic Loss due to Extreme Weather, Climatic and Hydrological Events (1970-2019), more than 11 thousand disasters were recorded worldwide, with more than 2 million deaths and 3.64 trillion dollars in losses.

Among the top 10 hazards that caused the greatest loss of human life during this period were droughts, storms, floods and extreme temperatures. However, the death toll dropped from more than 50,000 in the 1970s to less than 20,000 in the 2010s.

Weather extremes will be more frequent and severe in many parts of the world as a result of climate change, warned WMO Secretary General Petteri Taalas.

“That means more heat waves, droughts and wildfires, like the ones we have seen in Europe and North America. We have more water vapor in the atmosphere, which is exacerbating extreme rainfall and deadly floods. Warming of the oceans has affected the frequency and range of the most intense tropical storms.

Economic losses are increasing with increasing exposure. But behind the stark statistics is a message of hope. The improvement of multi-hazard early warning systems has led to a significant reduction in mortality. It is very simple, we are better than ever to save lives, said Taalas.

Meanwhile, the remains of Hurricane Ida struck the northeastern United States yesterday, causing rains and flooding so intense that hundreds of people had to be rescued from their homes in Maryland and Virginia.

A teenager died and two people are missing.

Emergency crews evacuated about 3,000 people living next to a dam in Johnstown, Pennsylvania.

The torrents of water toppled about 20 houses and washed away several mobile homes in the mountains of western Virginia, where about 50 people were rescued and hundreds were evacuated. One person is missing in the small community of Hurley, local press reported.

The water nearly reached the ceiling of the basement when rescue crews arrived at a residential complex in Rockville, Maryland. A 19-year-old was found dead, another person is missing, and about 200 people were displaced in nearby Rock Creek, Montgomery County Fire Chief Scott Goldstein said.

The periphery of Ida, which devastated Louisiana and Mississippi, is expected to drop up to 8 inches of rain from central Appalachia to New England.