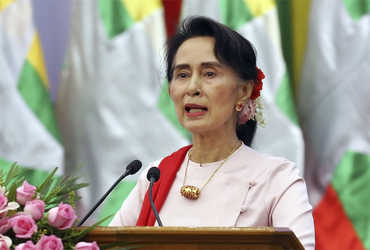 Several international organizations, including the United Nations, the European Union and the UK government, have criticized the court’s decision and the prison sentence.

A Myanmar court on Monday sentenced the country’s ousted leader and Nobel laureate Aung San Suu Kyi to four years in prison after being found guilty of illegally importing and possessing walkie-talkies and violating coronavirus restrictions. Suu Kyi was accused of being a walkie-talkie when soldiers raided Suu Kyi’s residence on February 1, 2021, the day of the military coup. An allegedly banned device was found at that time.

Soon after Suu Kyi’s government was overthrown by junta troops, widespread protests against military rule erupted in Myanmar, and the military launched a bloody campaign. So far at least 1,500 people have died in this violence. About a dozen cases have been registered against Suu Kyi, which carry a maximum sentence of more than 100 years.

Myanmar’s leader is at an undisclosed location

Pro-democracy leader Suu Kyi was convicted on December 6 of two counts of violating the COVID 19 protocol and inciting people to violate it, and sentenced to four years in prison. After the sentence, the chairman of the military government halved his sentence. The army has kept him at an undisclosed location. According to state television, he will serve his sentence there.

Aung San Suu Kyi has been charged with several charges including corruption, violating the Official Group Act, violating the Telecommunications Act and the Corona Rule. Suu Kyi, however, denied the allegations made by the military. Several international organizations, including the United Nations, the European Union and the UK government, have criticized the court’s decision and the prison sentence. Everyone has accused the case of being politically motivated. Following the court’s decision, a senior Myanmar official said that the sentence awarded to Aung San Suu Kyi showed that no one is above the law and that the army chief only reduced his sentence on humanitarian grounds.

Who is Mullah Baradar who can take over the reins of the Afghan government?

Why did Japanese Prime Minister Yoshihide Suga have to resign?