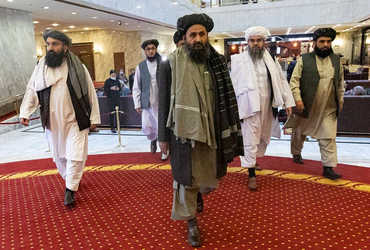 The Taliban will form their new government in Afghanistan on Friday. Mullah Baradar may be given the reins of the new Taliban government. The news agency Reuters made such a claim on Friday.

Reuters quoted the Taliban as claiming that the Taliban would form their new government in Kabul on Friday. Mulla Baradar will head that government.

At the same time, Mullah Mohammad Yacoub and Sher Mohammad Abbas Stanikzai, sons of Taliban founder Mullah Omar, will also hold important positions in the Taliban government. The Taliban has been preparing for the formation of a new government in Kabul for several days. The presidential palace in Kabul is being decorated, new flags are being made and a new video has just been released.

Who is Mulla Abdul Ghani Baradar?

Mullah Abdul Ghani Baradar, born in 1968, is the second Taliban leader. He is one of the founders of the Taliban. Mullah Baradar played a key role in the Taliban rule in Afghanistan from 1996 to 2001. However, after 2001, when the US invaded Afghanistan, Mullah Baradar was leaving for Pakistan. He was jailed by Pakistan in 2010 for allegedly trying to negotiate with the Afghan government without keeping Pakistan in the loop.

Mullah Baradar was released in 2018 after the US stepped up its efforts to negotiate with the Taliban. He then took over the reins of Doha, Qatar and played a key role in negotiations with the United States. Now Mullah Baradar can lead the Taliban in Afghanistan.