Most difficult operation to get people out of Kabul: Biden 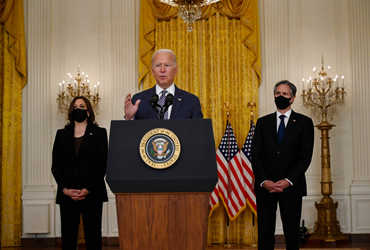 “The ongoing campaign to evacuate people from Afghanistan is one of the most difficult in history,” Biden said, adding that US presidents around the world, including the United States, were scrambling to biden in the wake of the Taliban’s occupation of Afghanistan. Hundreds of lives are at stake in the operation, but they are all committed to protecting Americans from Afghanistan and Afghans who are helping American and NATO forces. Meanwhile, Taliban leader Abdul Ghani Baradar has arrived in Kabul to form a new government in Afghanistan after August 31.

US President Joe Biden said in a threatening tone that the Taliban would not release American soldiers or American citizens if they were targeted. America will continue its counter-terrorism campaign. His government is trying to get the Americans trapped in Afghanistan out. We have evacuated more than 15,000 people since July. Since August 15, more than 15,000 people have been evacuated from Kabul. However, he did not say anything about extending the deadline for the withdrawal of American troops to August 31.

As the Biden government’s deadline to withdraw US troops by the 31st draws closer, millions of people who experienced the previous Taliban regime in Afghanistan have lost their lives. Thousands of people are gathering outside Kabul airport to escape the Taliban, where the US is carrying out an operation to evacuate thousands of people from Afghanistan.

For the past two decades, there have been fears that the Taliban would retaliate against those who served and helped US and NATO forces and the former Afghan government. So they are fleeing from Afghanistan to take refuge in other countries.

Meanwhile, Taliban leader Mullah Abdul Ghani Baradar, who is negotiating with the United States for the 2020 peace talks, has arrived in Kabul and is in talks with other leaders of the group to form a new government. Afghan officials say the Taliban will not officially announce the formation of their government until the August 31 deadline for the withdrawal of US troops. Meanwhile, in Kabul, in a week everything has changed as the texture has taken off. The terror of Taliban fighters is at its peak. The Taliban who are reaching home are forcibly cooking food from the people. A former judge in Afghanistan has claimed that the Taliban lost a woman’s food and burned her alive. He said that many such scary incidents are happening at this time.

Meanwhile, Hashmat Ghani, brother of former President Abdul Ghani, who fled Afghanistan for fear of the Taliban, has supported the Taliban regime. Hashmat Ghani Ahmedzai, president of the Kuchis Grand Council, has announced his support for the Taliban in the presence of Taliban leader Khalil-ur-Rahman and religious scholar Mufti Masood Zakir.