More than one million cases of corona have been reported in America in the last three days. 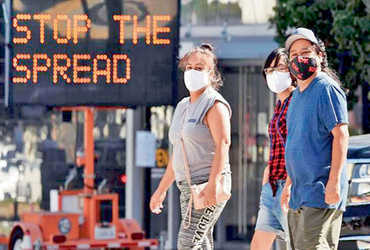 Europe’s vaccinators and non-vaccinators face to face: 37,120 new cases of corona and 1254 deaths in Russia

Booster dose approved for people over 50 in US

Meanwhile, cases of corona are increasing in Europe, due to which a war has broken out between those who are vaccinated and those who are not vaccinated. Despite two years of various restrictions, the coronavirus pandemic is not abating and governments are making vaccinations mandatory to maintain the crippled health system.

Austria has made vaccination mandatory from February 1, while Slovakia has banned non-vaccinated people from visiting shopping malls and all non-essential shops from Monday. Non-vaccinated people will not be allowed to attend any public events and will also have to undergo tests twice a week to go to work.

Slovak Prime Minister Eduard Hager described his move as a “lockdown” for non-vaccinated people. In Greece, Prime Minister Kyriakos Mitsotakis also banned people who were not vaccinated from visiting bars, restaurants, cinemas and museums and gyms. They will not be allowed to go to these places even if the test is negative.

Whereas in Singapore, from January 12, the corona vaccine will be given to children below the age of 12 years. The Health Ministry official said that the percentage of people below 12 years of age in corona cases was 11.2 percent. Which was 6.7 percent four weeks ago. On the other hand, in the age group of 12 to 20 years, corona cases are between four and five percent.

Meanwhile, US regulators have approved a booster dose for all adults over the age of 50. The government has also approved the Pfizer and Moderna booster vaccines. In Iran, 3,500 new cases of corona have been reported in the last 24 hours, in which 118 people have died. The total death toll in Iran has reached 128,000.