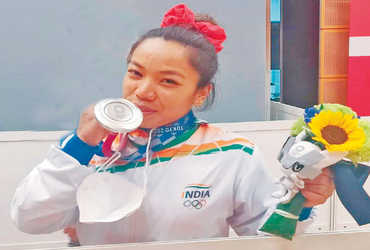 Chanu finished second in the 49kg category with a total lift of 202kg: Hou Zhihui of China won the gold by lifting 210kg.

Tokyo: India’s former world champion weightlifter Mirabai Chanu created history in the women’s 49kg category by lifting a total of 202kg and winning a silver medal at the Tokyo Olympics. With this, India has started with silver in the medal tally of Tokyo Olympic Games.

For the first time in the history of the Olympics, India won a silver medal in weightlifting. In this event, India won the medal after a long wait of 21 years. Karnam Malleswari last won a bronze medal at the 2000 Sydney Olympics.

The entire nation was happy with Mirabai’s victory and was welcomed by politicians, sportspersons, Bollywood celebrities and other dignitaries including Prime Minister Narendra Modi.

With this, India won a medal for the first time on the first day of the Olympics. Hou Zhihui of China won the gold medal in the Mirabai event. He lifted a total of 210 kg and set a new Olympic record. Indonesia’s Ayesha Windi Santika won the bronze medal by lifting 194 kg.

With Tokyo silver, Mirabai also erased the stigma of failure in Rio five years ago. All the lifts of Mirabai in Rio Olympics were bad. However, this time he made a new record by achieving silver success instead of performing brilliantly. Mirabai won the gold medal at the 2017 World Championships.

Mirabai Chanu won a historic silver medal for India on the first day of the Olympics, inspiring other Indian athletes to win medals as well. Now badminton player PV for India. Sindhu will begin her medal campaign. If no miracle happens, India will have a chance to win the gold medal. Similar to Sindhu.

Silver or Bronze in individual shooting Manu Bhaker, Bajrang Punia in wrestling and Vinesh Phogat in women, Mary Kom and Amit Panchal in boxing. The men’s hockey team is considered capable of winning either a silver or bronze medal despite having strong teams like Australia, Germany and the Netherlands. Similarly, in women’s doubles, Sania Mirza and Ankita Raina can win medals.