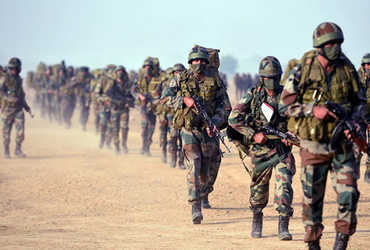 Soldiers from 17 countries, including India, are participating in a massive military exercise in Russia.

In this exercise, which will run from September 3 to September 16, the armies of 17 countries of India, China, Pakistan, South Asia will show their strength and for this the army of these countries has reached Russia.

Earlier, the Indian Army had also shown its mettle with China and Pakistan in a similar exercise organized by the Shanghai Cooperation Organization.

The armies of India and China will hold exercises with each other for the first time since the violent clash between Indian and Chinese troops in Galwan Valley in May 2020.

200 Indian Army personnel will participate in the exercise. These jawans belong to the Naga Regiment. At the same time, the armies of Kazakhstan, a country adjacent to India and Russia, have also started a 13-day war game. Which is going on in Kazakhstan. In which about 90 soldiers of Bihar Regiment of Army are involved.

It is important for India to note that military cooperation between China and Russia is becoming closer and in 2021 alone, 10,000 Russian and Chinese troops conducted a vigorous exercise and used many lethal weapons.