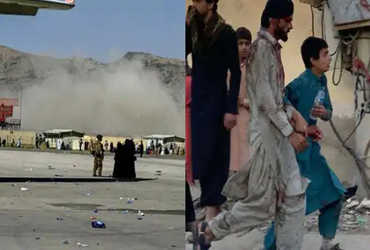 Big news has come out from Kabul Airport in Afghanistan. There is news of a suicide attack outside the airport. This has been confirmed by a Pentagon spokesperson. Two people have died in the incident. The United States, Australia and Britain raised fears of a possible terrorist attack at Kabul airport. Along with this, they are also warning their citizens to stay away from Kabul Airport.

this is the full chronology

The bomber struck in front of a US military base shortly after noon. It is being told that the attacker opened fire and blew himself up with a bomb. According to the information received, Australian soldiers have been deployed at this gate of the airport. It is noteworthy that shortly before the attack, ISIS terrorists threatened with explosion. The aim was to target Western troops who are helping to expel Afghan refugees from the country.

Several people are reported to have been injured in the explosion at the Kabul airport gate. The Pentagon has confirmed this. After the blast, there is an atmosphere of chaos at the airport. Some pictures have surfaced in which people can be seen shedding blood.

We can confirm the explosion outside Kabul airport. The number of casualties is unclear at this time. We will provide additional details when we can.