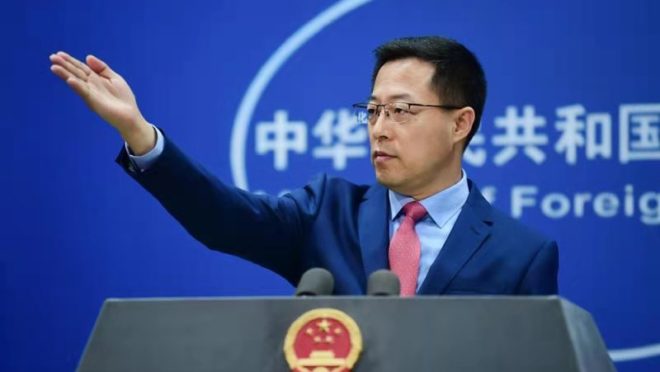 Zhao Lijian, spokesman for China’s Foreign Ministry, has no problem lying. It is said that Confucius said that lying was free as long as the truth did not harm the family or the nation. So what Zhao says and writes makes perfect sense.

In China, people have no idea what Twitter is. Connoisseurs must do a thousand and one pirouettes to circumvent the official blocks applied on the Chinese Internet, because, there, the service is prohibited. Zhao, in turn, is a tweeter. His account on social networks – which at the date of this column has nearly a million followers – is the platform on which he sets the tone for the aggressiveness of the new Chinese diplomacy. Through it, the spokesperson extends beyond his country the versions that the Chinese Communist Party wants to present of itself, the offenses that are made against others, the threats and, above all, the lies. Lots of lies.

During his press briefing, he repeated the thesis that the laboratory at the military base in Fort Detrick, Maryland, was the source of the coronavirus pandemic. Resumed. Since last year – when hampered by attempts to investigate the early stages of the pandemic – the Chinese regime has pushed the United States to blame the origin of Covid-19.

It’s nothing new that China is trying to make history. In 2020, Zhao had already pulled out of his hat the theory that the deadly virus had leaked from US military installations. Even an alleged pneumonia epidemic is said to have occurred in the United States as a result of the incident “censored” by the United States government.

The guy is so crazy that in his story he treats a fully functioning democracy as if it is the mirror of his dictatorship. In China, the government censors the press. In the United States, the press censors the president. By the way, Twitter, which isn’t shaken by Zhao’s antics, banned then-President Donald Trump.

But back to the origin of the virus. In June 2020, Li Yang, the Chinese Consul General in Rio de Janeiro, who owns a captive space in Jornal O Globo, collaborated to irrigate the same disinformation strategy. Your article deserves attention. The wolf warrior not only roars against the United States, but also reopens wounds in China’s relations with neighboring Japan.

Fort Detrick is the epicenter of China’s disinformation strategy to hijack efforts to trace the source of the pandemic that has killed 4.1 million people. The military facility houses some of the country’s most modern laboratories, which are used to manipulate some of the deadliest viruses known, such as Ebola. It’s no secret that until 1969 the base hosted a biological warfare program, which was cut short by then President Nixon. Since then, the unit has continued to be a center of excellence in biomedical research. In short. It went from a biological warfare center to a biodefense center. Something that makes all the difference.

In 2019, the Centers for Disease Control and Prevention (CDC) shut down the Fort Detrick labs on suspicion of failing the facility’s filtration systems. In March 2020, the level 3 and level 4 laboratories resumed their activities without restrictions.

The event was a godsend for the Chinese regime to build its theory to hijack the origin of viruses.

This is not the first time that Fort Detrick has served as a backdrop for information campaigns. By 1983, the then Soviet Union was already wavering against the West, but it did not let go. The Communist secret services have set in motion the cogs of their disinformation machine. The Soviets sowed the story that the AIDS virus was created in the United States, precisely at Fort Detrick.

The lie has been repeated so many times that after nearly 40 years it still arouses doubt in many unwary. Last year, a Brazilian doctoral student almost wrote this nonsense in his thesis. From what they say he was saved by this column.

Among the deliberate disinformation actions carried out by Chinese spokesman Zhao Lijian include the publication of forged photos to accuse Australia of war crimes and the constant allegations that samples of Sars-CoV-2, the cause of Covid- 19, have been found, in meat shipments from Australia and even Brazil. A blatant way of putting pressure on critics.

With much, much more money in its pocket, China is copying the recipe of the bankrupt USSR to construct versions of history that confuse and survive the time. But as they say Confucius, lying is lawful when it comes to protecting the nation. In this case, the regime and its small reputation.

Preparing for war against Taliban? Thousands of fighters gathered in Panjshiro