Learn the history of Panjshir Valley in Afghanistan, which has been a nightmare for Taliban 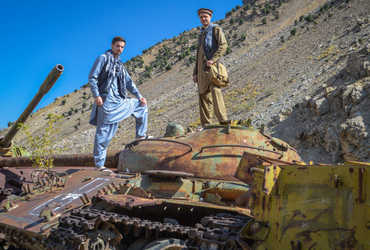 The Panjshir Valley region in the north-central part of Afghanistan, which the Taliban has not been able to conquer before and even now. Neither the Soviet Union nor the United States has been able to capture it in the past. The Panjshir Valley near the Hindu Kush Mountains, 120 km north of the Afghan capital Kabul, is known as an anti-Taliban zone. Even when the Taliban took over Afghanistan 40 years ago, the Panjshir region, including Bajrak, remained a stronghold of the anti-Taliban Northern Alliance. Afghanistan has 21 recognized districts and 7 provinces. Panjshir, which was part of Parwan Province until 2007, has a total of nine districts and over 200 villages. According to the 2021 census, 1 lakh 3 thousand people live in the entire Panjshir province. Mostly people of Tajik descent live in Panjshir. Panjsheer means five shares. Sher in Persian means lion (Babbar Sher) instead of tiger.

It is believed that five brothers built a dam on the Panjshir river in the tenth century, hence the name Panjshir. Panjshir Valley was considered to be a mine of Panna in ancient times. Silver coins were minted in the Middle Ages. Bajrak is an important capital of Panjshir in the northeast. Bajrak is basically a group of small Khanej, Junglak, Malaspa, Parande and Rahmankhel villages. Spread over 5 hectares, the population of Bajrak is about 4,000. Modern roadways and radio towers have also been built as part of US efforts to rebuild Afghanistan. The first wind power (windmill) in Afghanistan has been installed in Panjshir. A hydroelectric project can also be set up in the area. The 100 km long Panjshir Highway runs from Hindu Kush to Khawak Valley and Badakhsha Valley. There is also historical evidence that the road was used in ancient times.

The tomb of Ahmed Shah Masood, known as the Sher of Panjshir, is located in Bajrak. This tomb is a very sacred and inspiring place for the people of Panjshir. Ahmed Shah was a diplomat and military commander in Afghanistan. He was very adept at making guerrilla warfare tactics. The draft played an important role in anti-Soviet fighting when the Soviet Union occupied Afghanistan in the 19th century. This did not allow a superpower like the Soviet Union to infiltrate its Panjshir region.

He was defense minister in the Mujahideen government in Afghanistan in the 19th century after Soviet troops left. When the Taliban laid siege to Kabul on the 19th, the Sami fought a battle. The fighting was so fierce that over 20,000 people were killed. The Taliban organization was defeated in internal fighting within the Mujahideen. Afghanistan was occupied by the Taliban in the 19th century, but Masood was a staunch opponent of the Taliban’s religious rules and Islamic interpretations. The draft went to European countries and campaigned vigorously against the Taliban. Ahmed Shah Massoud was killed in a Taliban and al Qaeda-backed suicide bombing on September 9, 2001.

President Asraf Ghani fled the country after the Taliban took Kabul hostage on August 15, 2011, but Vice President Amrullah Saleh has challenged the Taliban by declaring himself the President of Afghanistan. This Amarulla also comes from Panjshir area. They have already said that they will not bow down to the Taliban under any circumstances.

On August 15, Saleh tweeted that he would not be willing to betray the legacy and soul of his great leader, Ahmed Shah Masood. The roads of Panjshir Ghati and the surrounding area surrounded by mountains are so inaccessible that it is not possible to attack the land. The Taliban also knows that the local people of Panjshir Ghati are heavy fighters and will never allow them to win. Amarulla, who heard about the Panjshir province and the legacy of Ahmad Shah Masood, would play an important role in Afghan politics for years to come. Ahmed Shah Masood’s son has also taken over the leadership for the security of Panjshir.