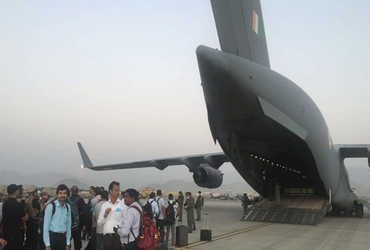 New Delhi: It was no less difficult to evacuate the employees of the Indian embassy and ITBP amidst the Taliban occupation and chaos in Kabul. Several senior officials, including the Indian ambassador, spent the night awake hoping to return to India.

According to sources, the task of gathering Indians was first carried out amid the blockade of Taliban fighters. He was then taken to a safe airport. The Indian Air Force C-17, which arrived in Kabul on Monday evening, was to leave late at night, but had to be halted in the middle of an evacuation mission due to Taliban patrols and chaos in the city. It also caused Air Force planes and pilots to spend the night in stressful situations.

Meanwhile, the Indian Secretary of State and National Security Advisor continued talks in Washington with US Secretary of State Tony Blinken and National Security Adviser Jack Sullivan in coordination with US officials controlling Kabul airport. Contacting the Taliban group ensured that the Indian contingent reached the airport without any significant damage. The most difficult task of all was to transport Indians from different places to one place. This work was done with great care.

The difficulty can be gauged from the fact that it took three hours to complete the 30-minute journey. Vehicles were frequently stopped by Taliban fighters during the blockade. The biggest challenge and fear during this was that any incident could endanger the entire operation. ITBP personnel were responsible for the safety of mission personnel and civilians.

After getting more than half the green signal, the convoy of vehicles set out for the mission and reached the airport after crossing a rough road. Keeping loved ones safe amidst the chaos at the airport was no less than a challenge. Ritsar’s fence kept people safe until they got on the plane. All boarded the plane at around 7 in the morning. As a result, those coordinating the airlift in Delhi also heaved a sigh of relief. The Indian Air Force aircraft took off at around 7.30 am. There was concern on everyone’s face till the plane took off from the border of Afghanistan.

The new iPhone SE 3 could be released in late April or early May, according to supply chain rumors

The young understanding of the Orient

Windows 11 free for Windows 10, Windows 8.x and Windows 7 users? This is what the code they discovered suggests.

Consequences after the flood disaster – reconstruction or relocation?