Kast wins presidential election in Chile, but there will be a second round 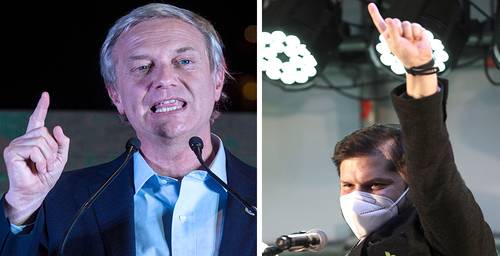 ▲ Antonio Kast, from the Christian Social Front, obtained 27.9 percent of votes yesterday, to 25.67 for Gabriel Boric (on the right), from the Pact Approve Dignity, with 94 percent of polls scrutinized. Photo Afp ​​and Ap

Santiago. The far-right / pinochetista José Antonio Kast, from the Christian Social Front – an alliance of the Republican and Conservative Christian parties – won the first round of the presidential elections held yesterday in Chile and will dispute the second decisive round with the leftist Gabriel Boric on 19 December.

With 94 percent of the polls scrutinized, Kast obtained 27.9 percent of the vote, while Boric, from the Pact Approve Dignity – made up of the five groups of the Frente Amplio plus the Communist Party – achieved 25.67 percent.

In celebrating his victory, Kast said that the first thing to do is to thank God for how everything has developed so far, very calm; and then my family; describing his as a struggle between freedom and communism.

In front of a few hundred supporters, he declared that a huge challenge is coming, where we must begin to summon many people, we have to go for all those who for some reason did not dare to vote for us, who did not dare to take that step We have to tell each of them that they did not feel called by this project that we want to welcome them.

Boric, in his turn, tried to enlighten his followers about how to rebuild forces, but warning them that a tough and difficult second round is coming, in which we have to be humble and receptive, never arrogant and haughty. That sometimes costs and we have a lot to learn from it. I’m going to play it, because there are many people who did not go out to vote and we have to transmit a message of calm and tranquility.

He also winked at the voters of other defeated candidates, particularly those on the center-left, asking them to build unity, and also those of Franco Parisi.

And the most surprising result was that of Parisi, candidate of the People’s Party, who came third with 12.94 percent of the vote, an outsider who does not live in Chile, but in Alabama, United States, and who avoided coming to the country because he has a claim for alimony in benefit of his children for about 250 thousand dollars. Parisi, who ran for the presidency for the second time and who carried out his campaign only through social networks and with a speech against the political class and the state bureaucracy, seems to become a key factor in December: where his votes will go, an electorate deeply disenchanted with politics and belonging to the lower income strata of society, it is anyone’s guess.

Everything will depend on how you talk to him and what offers are made, but it is a fundamental loot to be persuaded.

The support provided by other defeated coalitions will also be essential: the former concertation, which barely came fifth, with 11.70 percent of the votes. Its standard-bearer, the Christian Democratic senator Yasna Provoste, admitting her defeat, asserted that the totalitarian, fascist spirit is what the candidacy of José Antonio Kast represents. We could never have a neutral position on what this means, we do not want those horrors and those pains to be repeated, opening up to support Boric.

While Sebastián Sichel, representative of the ruling / Piñerista right and great loser of the night, with just 12.65 percent, said that I will communicate any decision in this regard, it is clear that for the leftist candidacy I will not vote, but I have programmatic differences with Kast that I am willing to talk.

Among the great and surprising results of the night, the election of Fabiola Campillai as senator for Santiago, first majority with 15.42 percent of the vote. She, a worker who worked in a food factory in the outskirts of Santiago, is a direct victim of the repression unleashed by President Sebastián Piñera after the social outbreak of October 18 (18-O), 2019: when she was waiting for the bus to go During her night work, she was hit in the face by a tear gas canister fired directly by the police, which left her blind, without smell and with a deformed face. Without any political trajectory, she prevailed yesterday, to make the victims of the outbreak visible in Parliament.

Although there seemed to be a high turnout, only 43.63 percent of voters did so, an even lower percentage than four years ago.

How is it understood that two years after the social outbreak of 2019, when millions of Chileans demonstrated against the neoliberal model and for structural changes; that one year after the plebiscite where 80 percent supported a new constitution, and that five months after the election of constituents where the right obtained only 37 out of 155; a denier of human rights violations and who justifies the dictatorship of Augusto Pinochet (1973-1990), defender of the status quo and with a reactionary program, is in the first position to become the next president of Chile?

The outburst was the expression of a broad but diffuse discontent in its contours. He gave something fundamental: today Chile is writing a new Constitution. But it was also the expression of immediate demands and the immigration issue entered the agenda strongly. There is a demand for order that has permeated and a right-wing populist discourse successfully broke into that register, says analyst Ernesto Águila.

He adds that the challenge of the left will be to speak to those people who want changes but who have fears. Your challenge will be that hope wins out over fear. The Chilean second round is open and a close and dramatic arrival is expected.

How is the second round expected? The big surprise is the vote of Parisi, who without campaigning came third. That electorate represents a strong anti-political and anti-party sentiment and this may be the faithful of the balance the definition of the second round, adds Águila.

Kast is a leader in the Bolsonaro line. His rise surprises and expresses a strong demand for public order and anti-immigration. Chilean society seems exhausted by the pandemic and the discourse about violence and the demand for order seems to have permeated the Chilean population, he explains.

Boric has a difficult challenge before the second round. It must speak to the regions, to the frightened middle classes and to a popular world overwhelmed by the advance of the drug trade, he indicates.

Among Boric’s weaknesses, its lack of implantation in regions and rural areas, not so in the Metropolitan Region of Santiago and other cities, which it won comfortably.