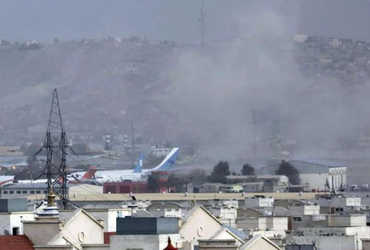 India has strongly condemned the deadly bombing near Kabul airport. India has said that the blast has once again emphasized the need for the world to unite against terrorism.

The State Department said the terrorist attacks reinforced the need for the world to unite against terrorism and those who harbor terrorists. Two suicide bombers and a gunman attacked a crowd near Kabul airport on Thursday, killing at least 72 people.

Of these, 13 are American soldiers and the rest are Afghan citizens. More than 140 people were injured in the attack. Terrorist organization ISIS-K (ISIS-Khorosan) has claimed responsibility for this deadly attack.

India has strongly condemned the bomb blast near Kabul airport. “We express our heartfelt condolences to the families of those killed in this terrorist attack,” Foreign Ministry spokesman Arindam Bagchi said.

There was chaos at the airport after the bomb blast. A picture from the airport showed people running away covered in blood. The first blast took place at the Abbe Gate of the airport and the second near the Barun Hotel.

The terrorist group ISIS-K has claimed responsibility for the deadly attack on the Kabul airport on the group’s Telegram account.

The attackers targeted people standing in a knee-deep water canal to escape the heat and in the meantime the bodies were scattered in the water.

We strongly condemn the bomb blasts in Kabul today. Our heartfelt condolences to the families of those killed in this terrorist attack.
Press Release: https://t.co/Zk4FG7OdSl