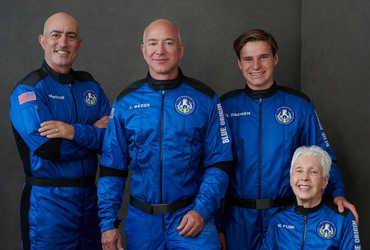 Jeff Bezos, the world’s richest man and founder of Amazon, has recently fulfilled his dream of traveling to space.

He has spent $5.5 billion on four minutes of spaceflight.

For example, out of this amount, 3.75 crore people could have been saved from starvation.

Poor countries are scrambling to get the corona vaccine. The United Nations wants to give 200 million doses to such countries, behind which there is a shortage of 2.2.6 billion.

This amount of humanitarian aid could have been extended to many countries of Africa.

The help of international funds is needed to increase production through agricultural development in poor countries and for this Rs 35 crore is required. The cost could be met in a 30-second visit to Bezos.

At least 300 million children are deprived of education due to various calamities including Corona, a campaign to raise 8 8.5 billion is going on for them.

Climate change also requires a huge amount. A large part of this amount could have been provided by the cost of space travel.

With that amount, five billion trees could be planted in the world and could be a big help in the fight against climate change.