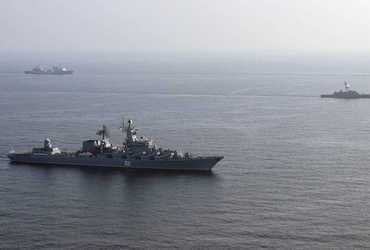 Tehran, dated 21
The Iranian Navy has started a joint exercise with China and Russia at the port of Chabahar in the north of the Arabian Sea in the Indian Ocean. According to a report by Al-Monitor, Russian naval ships are leaving for Iran for joint naval exercises.
Iran’s state TV said 11 ships, including three Russian destroyers and two Chinese ships, had participated in the joint exercise. Along with small ships and helicopters, Iran’s Revolutionary Guards will also take part in the exercise. The ships of the three countries were stationed at the Chabahar port in the north of the Arabian Sea. Will organize war games in km area. This is the third joint military exercise between the navies of the three countries since 2014.
Earlier, a Russian Pacific Fleet official said a missile cruiser, an anti-submarine warship and a tanker had arrived at Chabahar port in southeastern Iran. The ship had left Vladivostok last month. A joint exercise was conducted by the navies of Iran and Russia in February 2021. In recent years, the two countries have conducted at least two joint studies with China in the Middle East region.
The latest study was prepared after Iranian President Ibrahim Raisi arrived in Moscow to meet with Russian President Vladimir Putin. During the visit, the two leaders discussed working together to reduce America’s influence in the world. The two countries also discussed to work in the field of sustainable and strategic cooperation.
The US has imposed sanctions on Tehran for years over the Iran nuclear deal. The agreement is being renegotiated in Vienna, but no significant progress has been made. America threatens Russia over Ukraine. The United States has said it will impose sanctions on Russia over attacks on Ukraine it has never seen before. Experts are also monitoring studies in China, Russia and Iran in collaboration with Ukraine. The naval exercise of China, Russia and Iran at Iran’s Chabahar port is a setback for India. This port of Iran is very important strategically for India. China is developing Gwadar port in Pakistan. In this, India is working with Iran on the Chabahar port. India wants to have easy access to Afghanistan and Central Asian countries through this port. India has spent billions of rupees to develop this port. However, US sanctions on Iran in the wake of Iran’s nuclear program have also soured relations between India and Iran. In this, Iran is now leaning towards China and Russia.