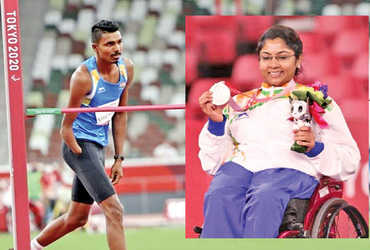 Para-athletes lauded by dignitaries including President and Prime Minister

Gujarat government will give Rs 3 crore to Bhavina

Tokyo: Gujarat’s Para table tennis player Bhavna Patel has made a name for herself in the Indian sports world by winning a historic silver medal at the Tokyo Paralympics.

With this, India celebrated the 116th birthday of Major Dhyan Chand on National Sports Day with a total of three medals in Paralympics with two silver and one bronze medal. However, the medal was postponed in protest of Vinod Kumar’s classification of paralysis.

Bhavna, a para-table tennis player from Gujarat, was greeted by politicians and celebrities including President Ram Nath Kovind and Prime Minister Narendra Modi. The Gujarat government had announced a reward of Rs 3 crore for Bhavina’s historic silver achievement. The National Table Tennis Federation also announced a grant of Rs 31 lakh to Bhawna.

In the women’s singles event, world number two and third Bhavna Patel lost 0-3 to world number one Zhou Ying of China in the final in Tokyo.

Zhou Ying won the gold medal in the C-4 category singles event for the third time after 2008 and 2012. In the final, he won in just 19 minutes. Indian para-high jumper Nishad Kumar equaled his own Asian record with a jump of 2.06m to win a silver medal in the T-47 category high jump final. Dallas Wise of America also won the combined silver medal by crossing a height of 2.06 meters.

Celebration with Garba in Bhavina village

Bhavna Patel won the historic silver medal in Para Table Tennis at the Tokyo Paralympics. Along with this, people celebrated with pomp in his Sundhia village of Mehsana district. After the achievement of the spirit, there was a festive atmosphere in the village and people hugged each other and also set off fireworks. Bhavina’s father Hasmukh Patel said, ‘We never consider her paralyzed. It is divine for us.