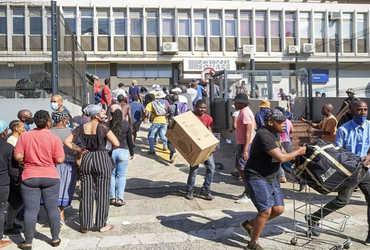 Crowds of fanatical Indians carrying bats, hockey sticks and iron rods clashed with blacks on the streets of Phoenix.

Phoenix: In the South African city of Phoenix, the ongoing conflict between Indians and black citizens over the Jacob Zuma issue has turned violent once again. Indians resorted to violence in a very riotous manner in which about a dozen black civilians were killed.

A crowd of Indians armed with cricket bats, hockey sticks, iron rods and hammers stopped a minibus and crashed into a group of black youths.

Indians killed these black youths to such an extent that 12 of them died. Crowds of Indians blocked the movement of black civilians on the streets of Phoenix City and searched and targeted black people.

During violence that erupted after a message went viral in a WhatsApp group, a mob of Indians surrounded and thrashed a black man named Ilmini and his friends, who were traveling in a minibus. However, some of Ilamini’s friends managed to escape from the crowd safely.

In fact, for the past few days, messages have been circulating in various groups created by recruiters on WhatsApp that hundreds of black Indians are going to attack the community. In addition, some white citizens had lodged police complaints against Indians with the intention of robbing Indian shops.

Regarding the incident, Klausulu Chief Minister Sihal Zikalala said that those killed in the violence were completely innocent and they had come for the purpose of escape. According to the state home minister, 33 of the 36 people attacked by Indians were black. The police have arrested 56 people in connection with the violence.