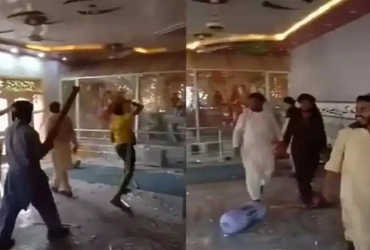 A Hindu temple in Pakistan’s Punjab province was attacked and vandalized by some Muslim fundamentalists. Several idols of the temple were vandalized and the temple premises caught fire. The Pakistani government had ordered an inquiry into the matter.

In this case, an FIR has been registered against 100-150 unidentified people on behalf of Bhong Sharif police under 6 different sections. Cutting. The hearing will also take place in the Supreme Court today.

A Hindu temple was vandalized in Bhong town of Rahim Yar Khan district in Pakistan’s Punjab province. A mob of some radical Muslims from the city stormed the temple premises and set the temple on fire. Destroyed the idols. The police did not control the crowd, so the Pakistan Reserve Force personnel had to be called.

The FIR was registered more than 24 hours after the Siddhivinayak temple was vandalised. All the FIRs have been done against unknown people. No case has been registered against any of the nominees while the faces of the vandals are clearly visible in the viral video. Earlier on Thursday evening, Pakistan Prime Minister Imran Khan had ordered action against the culprits.

The government of Pakistan’s Imran Khan had ordered an inquiry amid criticism from all sides. An official statement from Pakistan’s PM’s Office said that the government is criticizing the attack on the Hindu temple and will conduct an impartial investigation into the incident.

Police have been deployed to maintain peace in the area. However, not a single person was arrested in this incident. The Hindu community has demanded the immediate arrest of the attackers.