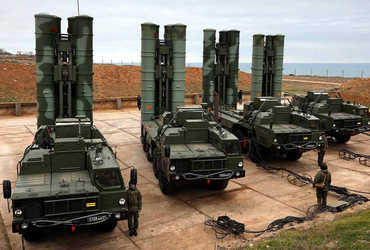 The deliveries of the most lethal Russian air defense missile system, the S-400, to India will begin by the end of this year. The above information was given by the President of Almaz Ante, the company that made this system. India recently signed a deal with Russia to shoot down enemy aircraft and missiles.

“Our company will deliver the first shipment to India by the end of this year,” company officials said. Indian Army officers are currently being trained to operate this system. The training of the first batch of these officers has been completed and the training of the second batch is still going on. I can’t say the number of officers but their performance during training has been very good. I expect the same from the second batch of Indian military officers. He is a very capable officer.

He even said that with the kind of skill shown by Indian officers during training, it seems that the Indian Army is one of the best in the world. We are also ready to train more officers if India needs it.

The US is also distracted by the S-400 missile defense system. Because this missile system is capable of targeting enemy fighter jets in any kind of situation. The Russian company claims that even America’s most sophisticated F-35 aircraft cannot escape it.

The S-400 system will increase the strength of the Air Force. In 2018, India signed an agreement with Russia to purchase five such systems. India will have to pay Rs 33,000 crore for this. This system also has the ability to launch nuclear missiles in the air from enemy countries. This system can launch 72 missiles simultaneously. It is also easy to manipulate. Because it is mounted on trucks. The S-400 system is capable of operating at temperatures from minus 50 degrees to minus 70 degrees. Destroying this missile is a very difficult task for the enemy.

The system has four types of missiles with a range of 40 km to 400 km. It is also capable of destroying targets flying at an altitude of 40,000 feet. Its radar is extremely sophisticated and powerful. Which can quickly detect enemy aircraft or missiles. Its radar can simultaneously track 300 targets at a range of 600 km.

Russia has already sold the S-400 system to India’s arch-rival China in 2014. Turkey has also bought this defense system. It was delivered to Turkey in 12019.