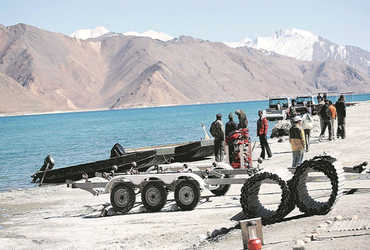 New Delhi: India and China have agreed to withdraw troops from Gogra Heights in eastern Ladakh. The Moldo talks have paved the way for an agreement. Since May last year, the ongoing conflict between India and China on the border has now stopped. The two armies have been face-to-face since last year at Gogra Heights. Government sources said the agreement was reached after a one-time round of talks in Moldo, China.

The talks between the two countries were followed by a meeting of foreign ministers in Dushanbe on July 12 and a meeting of coordination and coordination on India-China issues on June 9. During the talks, India and China held an in-depth discussion on the areas in the western part of the LAC where there is a standoff over the withdrawal of troops.

There was a frank and intense exchange of views between the two sides on resolving the standoff. Describing the talks as positive, both sides said that it has developed mutual understanding. Officials of both the countries also agreed to maintain the pace of negotiations to resolve the draft expeditiously as per existing agreements and protocols. Both sides also expressed their commitment to maintain peace along the LAC. Thus China has realized that it is difficult to keep the border with a country like India constantly burning and even in the cold of the Himalayas. China itself is well aware that its soldiers cannot withstand the freezing cold of the Himalayas.

At least trumpeting with the US the US has started banning one company after another and removing them from the US market. On the other hand, with the Taliban becoming stronger in Afghanistan, China is now beginning to fear terrorism at home.

In this way China is being beaten on every front. A government official said China had deployed an estimated 20,000 troops along the Line of Actual Control in the Ladakh region last year, but Chinese troops could not withstand the Himalayan cold there. As a result China now recruited new troops from other nearby areas. Bad weather has worsened the condition of Chinese soldiers.

On the other hand, India changes its troops every year, but India need not change all its troops. India only replaces about 30 to 40 percent of its troops. A year has passed since the India-China conflict in eastern Ladakh.

The border dispute between India and China started in May last year and tensions on the border escalated after a skirmish between the armies of the two countries in the Galwan Valley on June 15. Negotiations have been going on for a long time between the two countries to resolve the dispute, but no agreement has been reached so far.