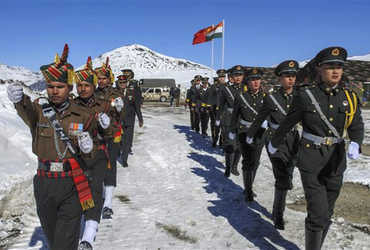 New Delhi: The armies of India and China have agreed to reduce tension on the LAC. The 13th round of military-level talks between the two countries has been described as positive. Both Indian and Chinese armies have agreed to expeditiously resolve the issues in Eastern Ladakh. This information was given in a joint statement issued on Monday.

The high-level military talks between India and China took place after a long period of nearly three and a half months. It laid special emphasis on moving forward in the process of withdrawing troops from the remaining conflict zones in eastern Ladakh. The talks took place on Saturday. The two sides also agreed that they would continue their effective efforts to ensure stability in the western region. Peace will prevail jointly with them.

According to the statement, both sides deepened mutual understanding and described the meeting as constructive, which led to further development of mutual understanding. They agreed to expeditiously resolve the outstanding issues as per the existing agreements and protocols. Both sides also agreed to maintain the momentum of the talks. Both sides also agreed to continue their impressive efforts to ensure stability along the LAC.