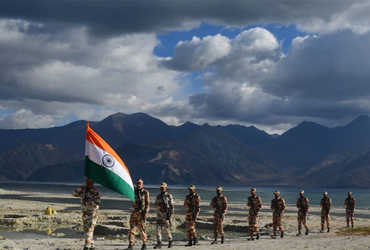 Today on 15th August, the country is celebrating its 75th Independence Day. On this occasion, the Indo-Tibetan Border Police personnel hoisted the flag on the banks of Pangong Tso lake in Ladakh. After which the soldiers raised the slogans of Vande Mataram and Bharat Mata Jai.

Today the country is celebrating independence. From Kashmir to Kanyakumari, everyone is in adventure. Prime Minister Narendra Modi hoisted the flag at the Red Fort for the 8th time. There, ITBP personnel also hoisted the flag on the banks of Pangong Tso lake in Ladakh.

ITBP personnel were seen waving the flag in Ladakh. On the occasion of Independence Day, the tricolor was hoisted on the border of the country.

After hoisting the flag, ITBP personnel saluted the tricolor and declared the victory of Mother India. Independence celebrations on the India-China border were spectacular. ITBP personnel were seen parading with the tricolor in their hands. On the occasion of Independence Day, there is an alert on the border of the soldiers of the country. The corners are being closely watched.