In the US, the Omicron variant of Corona has created more outcry than Delta. 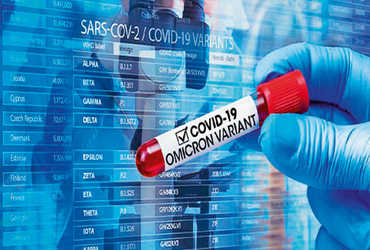 more than half of americans are tired of corona epidemic

WASHINGTON: The daily death toll in the US due to the highly contagious Omicron variant nationwide exceeds the daily figure recorded during last year’s delta wave.

The average seven-day death rate in the US rose from 2,100 in September when the delta version was in effect through mid-November to 2,267. The omicron variant becomes a less serious infection for most people, but the more widespread the infection, the more people get sick and the more people die.

Andrew Noymer, a professor of public health at the University of California, Los Angeles, said the death toll in the US could be as high as one million. Researchers agree that omega-3 infections do not cause any symptoms, but omega-3 infections, such as the flu, can be fatal. This is especially true for the elderly and those who have not been vaccinated.

More than 50 patients have died at the University of Kansas Hospital this month and 200 others are undergoing treatment. A video of the hospital’s morgue has recently gone viral, which shows dead bodies being kept in bags in the refrigeration unit. This is the reality, said hospital coordinator Sierra Wright.

Our concern is why don’t funeral service providers provide fast service? We have refrigerated trucks but we don’t want to use them unless we are forced to use them. Dr. Katie Dennis, who was doing a routine postmortem, said the morgue was overcrowded. It is not unusual for corpses to exceed capacity throughout the month of January.

Meanwhile, a survey by the Kaiser Family Foundation found that more than half of Americans are tired of the corona epidemic and 77 percent believe that most people are infected with corona. This includes 77 percent vaccinators and 74 percent non-vaccinators. Less than half expressed hope about the coronavirus pandemic, but 40 percent expressed displeasure and 29 percent said they were confused.

62% of people believe that the vaccine protects against corona infection. Half of Americans blame the CDC and 44 percent for the lack of tests to diagnose the coronavirus to President Joe Biden. Between 11-23 January, 1133 people were called and surveyed.

The total number of corona cases in the world has crossed 360 million (369,440,775) and the total death toll from corona is 56,48,611. According to Johns Hopkins University’s Center for Systems Science and Engineering, a total of 9.92 billion doses of corona vaccine were given against it worldwide.

America has been hit hardest by the Corona pandemic. The highest number of corona cases in America are 74,058,529 and the total corona death is 8,82,275. Meanwhile, Russia recorded more than 100,000 new cases and more than 600 (668) deaths for the second consecutive day.