In the US, Tesla had to recall 5.79 lakh electric cars 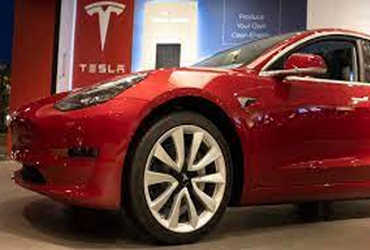 This is the fourth announcement in a fortnight that security regulators have taken a tough stand.

DETROIT: The company has announced a recall of 579,000 vehicles at Tesla, a major US electronics maker, because of the boombox function given to its vehicles, causing noise in external speakers and obstructing legal warnings to pedestrians. Is.

The increased investigation into Tesla vehicles by the National Highway Traffic Safety Administration Agency, the US director of safety in the US, has prompted the company to announce a recall for the fourth time in a fortnight. The company has had to recall its vehicles in two cases for violations of federal vehicle safety regulations and in two cases for a software error.

The agency said the problem can be resolved by sending software updates online. There is no problem if the boombox is disabled while driving, turning and parking.

The Boombox feature allows the customer to pre-set the Pedestrian Warning System-PWS. When the boom box alerts pedestrians, the noise emitted prevents them from complying with safety standards.

The agency began seeking information from Tesla in January 2021. Months later, Tesla defended that the boombox complied with safety regulations, but on January 29, the company began disabling the boombox by recalling the vehicles.

In 2010, Congress made it mandatory for electric vehicles to warn pedestrians. According to this rule no vehicle manufacturer or dealer can replace sound warning pedestrians.

Tesla has had to recall these fortnightly vehicles from January 2021 until Tuesday. Last week, Tesla had to pull back 54,000 vehicles because a bug in the full self-driving software caused the vehicle to cross a stop sign instead of stopping.

Similarly, Tesla had to pull back eight million vehicles because the driver was not warned if he did not wear a seatbelt. About 27,000 vehicles had to be pulled back this week because the cabin heating system did not defrost the windshield quickly enough.

Last week, Tesla claimed to be testing full self-driving software in 60,000 vehicles in the US. But in the third quarter, it was tested in only two thousand vehicles. The cost of the software is 12,000. This will result in a huge increase in Tesla’s profits, the company said.