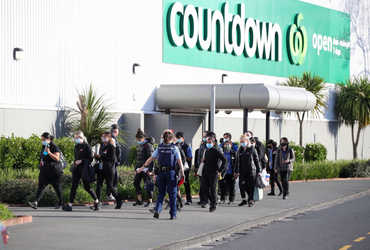 New Zealand officials said on Friday they shot dead a violent fanatic who stabbed six people in a supermarket. Prime Minister Jacinda Ardern said the attacker was a Sri Lankan national who was under the influence of the Islamic State (IS) group. He was on the radar of the country’s security agencies and remained under strict surveillance for eight hours.

Ardern said that keeping the man in prison is not permitted by law. Of the three people who were shot by the attacker, the condition of three remains critical. It was a violent and senseless attack. The bomber struck in front of a supermarket in New Zealand’s largest city, Auckland, shortly after noon.

Ardern said the man was shot within 30 seconds of the attack by a police team and a special tactical team as security forces were constantly monitoring him. Police Commissioner Andrew Koster said he was concerned about the man’s ideology and was keeping a close eye on him. Koster said he followed her from her house to the supermarket on Friday. He entered the shop where he was before. He took a knife from the shop and started attacking in no time.

Koster said two police officers from the Special Tactics Group fled when the attack began. The attackers ran towards the police with a knife. So he was shot and killed. Inside the supermarket, a video made by a man shows 10 shots fired.

Ardern said he could not disclose all the details due to legal hurdles. Some supermarket shopkeepers tried to help the injured. Auckland is under severe lockdown due to the outbreak of the Corona pandemic. Most businesses are closed. Generally people are only allowed to go out of the house to buy groceries and medicines.