In Haiti, the lack of water threatens the health of 540 thousand children: Unicef 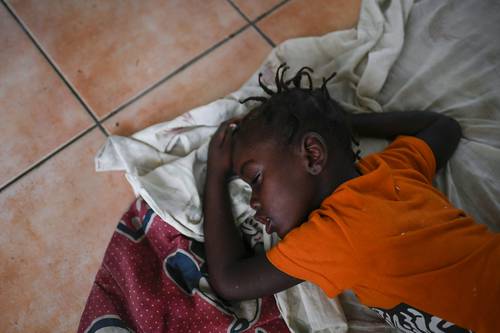 ▲ Tropical Storm Grace reached Haiti days after the 7.2 earthquake, displacing thousands of people. The image, in a temple adapted as a refuge in Les Cayes.Photo Ap

Madrid. Some 540,000 minors affected by the earthquake that struck southwestern Haiti on August 14 are at risk of suffering from a water-borne disease, such as cholera, according to the United Nations Children’s Fund (UNICEF), which has raised to 61.7 million euros its request for funds after the earthquake.

The Haitian authorities yesterday ended the search for bodies and the total death toll is at least 2,200.

The lack of potable water and sanitation and hygiene facilities threatens to cause a new emergency in Haiti, where it is feared that acute respiratory infections, diarrheal diseases or malaria, among other preventable diseases, will now rebound.

Haiti has not registered any case of cholera since February 2019, but the representative of Unicef ​​in the Caribbean country, Bruno Baes, indicated in a statement that without urgent and firmer action, the reappearance of cholera and other diseases transmitted by water is a real threat that increases day by day.

Before the earthquake, only half of the sanitation facilities in the three most affected departments had basic access to water services. After the earthquake, almost 60 percent of the people who live in these departments lack access to drinking water, with a particularly dramatic situation for those who have been left homeless.

Unicef ​​collaborates with the National Directorate of Water and Sanitation and members of civil society, in some works that have already made it possible to bring drinking water to 73,600 people and distribute hygiene kits to 35,200, among other emergency actions.

The agency had initially requested $ 15 million to reinforce its deployment after the earthquake, but this Friday it raised the figure to $ 73.3 million. For now, you have received less than one percent of this amount.