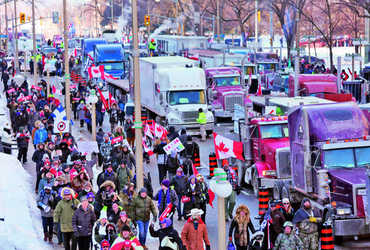 Ottawa, Dte
There is widespread public outcry in Canada about restrictions related to corona, including mandatory corona vaccination and lockdown. In Canada’s capital Ottawa, more than 40,000 truck drivers along with more than 30,000 trucks surrounded Parliament and the prime minister’s residence. Prime Minister Justin Trudeau had to flee with his family to a secret location, fearing the protesters would turn violent. The ‘Freedom Convoy’ campaign started by truck drivers against the decision to make the corona vaccine mandatory in the country turned into a big demonstration. Protesters shout slogans against PM Trudeau in a 20-km truck in Ottawa. The long caravan was shaken.
Truck drivers gathered in the Canadian capital Ottawa on Saturday to protest the government’s decision to make vaccination mandatory for those crossing the US border. Along with this, there was a lot of displeasure among the people regarding the lockdown and coro-related restrictions in the country. In such a situation, Prime Minister Justin Trudeau called the truckers who made the controversial statement a “minority”. Trudeau said the truck drivers are anti-science and pose a danger not only to themselves but to others in Canada. Trudeau’s statement enraged the truck drivers and rallied under the “Freedom Conway” campaign in the capital Ottawa, where they were accompanied by people across the country protesting the rules related to Corona.
Public outcry forced Prime Minister Justin Trudeau and his family to leave the Prime Minister’s residence and move to a more secretive location. The protesters compared the restrictions on Koro to fascism. They displayed Nazi symbols alongside the Canadian flag. Several protesters criticized Prime Minister Trudeau for targeting him. Protesters called the government’s decision to make vaccinations mandatory, not a health issue, but a “control” conspiracy by the government.
Canadian truck drivers were also supported by the world’s richest man, Elon Musk. Musk tweeted, “The secret of Canadian truck drivers” and now the echo of this movement can be seen even in America. Truckers are waving Canadian flags and demanding ‘freedom’. They are raising slogans against Prime Minister Trudeau. During these demonstrations such a situation had arisen that the sound of thousands of big trucks could be heard on the road. Truck drivers heading towards the capital Ottawa honked horns together on the road to protest against the government.
Thousands of protesters, including children, youth, women, the elderly and the disabled. Hundreds of protesters also made derogatory and objectionable statements against Prime Minister Trudeau. Several protesters were seen dancing at the main war memorial. Canada’s top military General Van Eyre and Defense Minister Anita Anand strongly condemned the protesters’ actions. Despite warnings of cold in Canada, thousands of protesters surrounded Parliament and stormed Parliament. The police were on high alert to prevent violence by the onlookers.