If an American is attacked, we will respond strongly 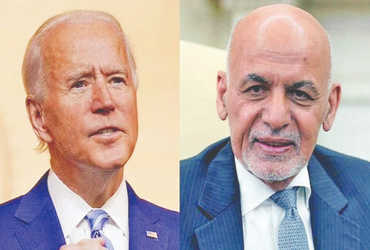 Washington: US President Joe Biden said the US would retaliate if the Taliban attacked US troops in Afghanistan or tried to stop its operations. He also hit out at fugitive President Mohammad Ghani, saying he had fled without a fight. The leaders of Afghanistan could not unite for the people there.

He said that the US military is evacuating Americans trapped in Afghanistan. If the Taliban intervenes, the US will respond. “We will be back after the mission to call on American citizens and allies,” he said.

He said that America is ending this war after the longest bloodshed in twenty years. Whatever situation we see in Afghanistan today is sad. No matter how many armies there are, no one can make Afghanistan stable and secure. That is why in history Afghanistan is called the cemetery of empires.

Biden said that what is happening in Afghanistan could have happened five years ago and fifteen years later. Our army has been there for two decades. I am the fourth President under whose command our army is running a mission there. Now I do not want to give this opportunity to the President in the fifth. I cannot mislead Americans by saying that in a few days all will be well. However, I do not regret the withdrawal of American troops.

Biden said Afghan President Ghani had fled putting his country at risk. He had to fight the Taliban, not run away. He must ask the question why he did this, he must answer it. He blamed his leaders for the current crisis in Afghanistan. The leaders of Afghanistan did not show unity for their people even in such difficult times. They failed to stand by each other in this difficult time. Afghan leaders could not even compromise for the future of the country and that is why Taliban occupied Afghanistan.