If Americans and Russians shoot at each other, world war will break out: Joe Biden 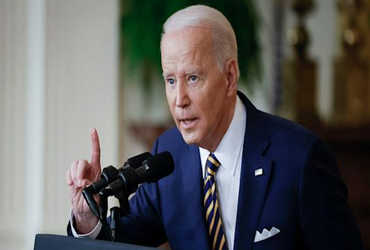 – We are not ready to listen to the teachings of (West): Russia

LONDON: British Prime Minister Boris Johnson made it clear on Thursday evening that the Ukraine crisis has reached an alarming level. If the phase is coming to Europe after decades, on the other hand, President Joe Biden said in response to a question from journalists about the American forces sent to rescue Americans in Ukraine if the Americans and Russians would not go to war. So those armies will not go to war. Started firing at each other World War II would break out.

Incidentally, top Western diplomats are holding peace talks with Moscow. Moscow has said it is not ready to listen to the sermon. In addition, Russia has accumulated a total of more than 100,000 troops and weapons along its border with Belarus. Which is not ready to back down despite pressure from the West.

The United States has begun sending troops to Poland and Romania, and the British Royal Air Force landed 50 British soldiers on Thursday. After this Boris Johnson arrived in Warsaw. Where he held talks with the Prime Minister of Poland. He said he believes Putin has not yet decided what to do about Ukraine. Therefore, the West must continue its diplomatic activities along with military preparations to impose sanctions on Russia.

The British Foreign Secretary Bizetas visited Moscow and told Russia that it would pay a heavy price if Russia attacked the neighboring countries. But Russia’s Defense Minister Lavrov has said the West is wrong about the rocks of Russia’s military. He also quoted President Putin as saying that even though the former Soviet Union, NATO nations could not be run.

However, NATO countries want to join the Baltic states, including Ukraine. So the situation is getting tense.