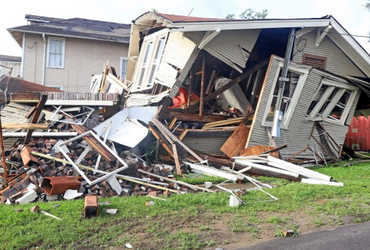 The total damage caused by the flood is estimated at 50 50 billion. Is

Sunanda, Malathi Kanche, Dhanush Reddy and Tara along with their son drowned in the flood waters

New York: Hurricane Ida has killed five people of Indian origin in New Jersey. This mortality rate is likely to increase. Hurricane Ida, which struck on August 29, is the deadliest storm since Hurricane Katrina in 2005.

Hurricane Ida has killed at least 65 people so far. The most deaths occurred in New Jersey, New York and Louisiana. According to media reports, 56-year-old Sunanda, a resident of Woodbridge, was walking outside her house when she was swept away by flood waters, in which she died.

Software designer Malathi Kanch, 46, was on her way home with her 15-year-old daughter when their vehicle was hit by a storm. His vehicle was trapped in floodwaters near Route 22 on Bridgewater, New Jersey. The authorities had initially placed Kanche on the missing list. However, he was declared brought dead on the spot on Friday.

Dhanush Reddy, 31, was trapped in flood waters in South Plainfield, New Jersey. The balance of his car got disturbed due to flood water. Officials say Reddy was pushed into a drain pipe by flood waters and his body was found several miles away.

Dharmeshwar’s wife and child, on the other hand, were stranded far away in the flood waters and later died. Hurricane Ida has caused damage to the environment as well as civil infrastructure. The government estimates that the storm caused 50 billion in damage.

Work of the week: The Choir of Stones | free press