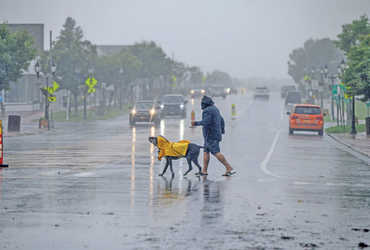 The impact of the flood is expected to subside, but trees and power poles may be uprooted by the floods.

Washington: Hurricane Henry is currently at its peak in the northeastern United States. Due to this, heavy rain and storm conditions have arisen in Long Island and Southern New England since Sunday morning. These hurricanes have been kept in the category of Category-1 Hurricane. It is likely to have many dangerous effects in these areas.

Lakhs of people are now at risk in areas notified under Category-I storms, but even in areas where the storm is less affected, floods are likely to cause tree falls and power poles to collapse. Storm warnings have been issued to 45 million people due to these storms.

As Henry continues southeast from Montauk Point to the northwest, everyone on the route is warned, including New York City. In 2012 Hurricane Sandy caused major landfalls in major US states, including New Jersey. Meteorologists say that Hurricane Henry is a far more powerful hurricane than Sandy.