how was the 1st day of the “Covid passport” in France 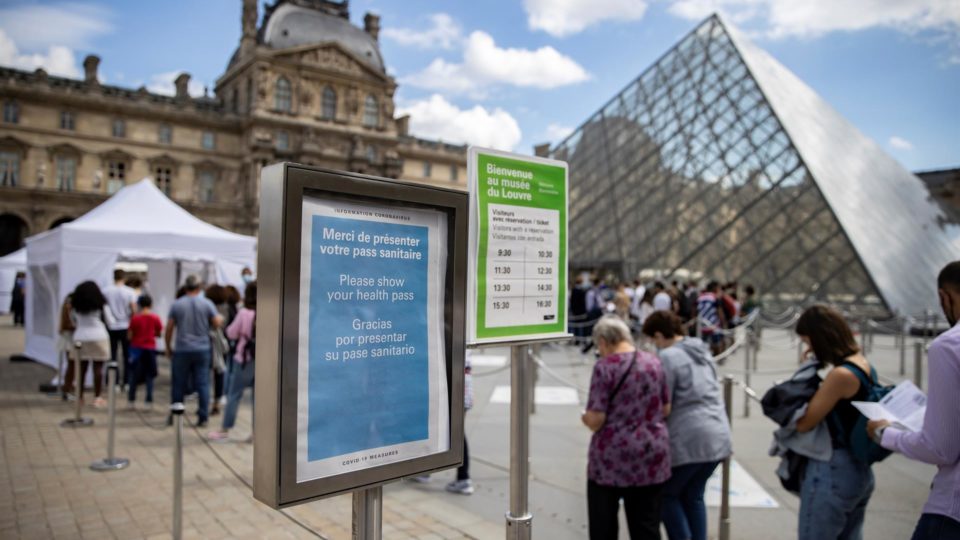 Tourists wearing protective masks line up at the Louvre, near a sign indicating that a vaccination passport or “health pass” is required to enter the museum on August 5, 2021. Worldwide of use | Photo: EFE / EPA / IAN LANGSDON

Despite all the protests, the health passport entered into force in France on Monday (9). This is a QR code that attests to a complete vaccination, a negative Covid-19 test, or a recovery from an illness.

Even if the French government has not backed down on its proposal, the more than 230,000 demonstrators across the country have managed to get the government to relax certain measures: the screening of unvaccinated people is valid for 72 hours and no longer 48 hours. .

You will also need to present your passport for visits to retirement homes, bars and restaurants (including outdoor spaces), hotels, nightclubs, cultural spaces and libraries, places of recreation, sports competitions and long distance transport.

The system encountered some operational difficulties from day one.

British tourists enjoying their summer vacation in the northern hemisphere could not prove that their national vaccination certificates were valid in the French system.

Many residents simply applied for the local passport or one recognized by the European Union. At the Rencontres d’Arles, for example, the world’s largest photography festival, which takes place on the south coast of France, James Hyman (54), an art dealer and collector in London, told the English newspaper The Telegraph said it was “a lottery” compared to places that accepted their NHS QR codes.

“At each location, you have to show proof of vaccination and your ticket, and you can’t go anywhere without showing your pass,” he said. “The rule seems to be that unless you join the conversation, they won’t accept the NHS app as proof,” he said.

Tourists also complained about the lack of communication from the government of the two countries which failed to notify them properly. It was just after France was removed from the “orange list” of Covid-19 risks in the United Kingdom.

Domestic tourists, meanwhile, said they had not encountered any difficulties using the app. In the coastal region of Cap d’Adge in southern France, visitors said the app was working fast.

However, a restaurateur named Céline told Le Parisien that she had been embarrassed to withdraw two customers from her restaurant because their certificates had not been validated. She also complains that she has noticed a slight decrease in the number of customers.

Some tourists who were not yet fully vaccinated complained about the long queues for a PCR test.

The Justice Department also provides for fines for anyone trying to use someone else’s passport. The fine can vary from 135 to 750 euros. Amount that can be doubled in the event of a recurrence in less than 15 days. A third offense in less than 30 days could result in a fine of € 3,750 and six months in prison.

Business leaders also face fines of up to a thousand euros if they do not check their passports.

As for the possession of a false vaccination certificate, the government plans to prosecute fraudsters for “possession and use of false documents”, with sentences ranging from two to five years in prison.

With tougher measures for the unvaccinated, the health ministry hopes the country can reach the goal of 50 million fully vaccinated people by the end of August. This would represent 85% of people who can be vaccinated in the country.