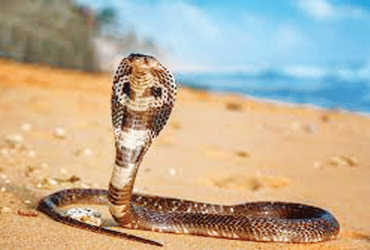 Beijing: Corona has not yet calmed down, but the practice of killing and eating dangerous animals still continues in China. It seems that even from Corona, he has not learned any essence yet. A similar incident has happened in China. A man was cutting a cobra and making its soup. But making this soup cost them dearly. The young man lost his life due to the bite of a bitten snake. The accident happened when the man was going to throw the sharp fangs of a cut cobra.

This incident is from the southern city of Foshan in China. The incident took place at a hotel in Foshan city. The chef of the hotel was making its soup after biting a cobra snake. For this, he cut the cobra into several pieces and also cut its sharp fangs and kept them aside. After sometime when he picked up his severed fan what happened was beyond his imagination.

The severed fangs of a cobra bite the chef. It felt like a cobra’s bitten fangs and immediately Maharaj fell down there and panicked. The hotel owner immediately called a doctor, but his condition continued to deteriorate. He gave his life before the arrival of the doctor. After his death no one knew what to do.

A customer of the hotel told about the incident. “I was having dinner at the hotel on my wife’s birthday when suddenly the noise started,” he said. We went there and saw what had happened. People wondered how the fangs of the bitten cobra bit him and he died.

A police spokesman said it was an unusual incident, but it looked like a tragedy. Significantly, in many provinces of China, soup made from poisonous cobra meat is very popular. This soup is available in most hotels.