Hits, shouts and shoves, in battle for control of the Honduran Congress 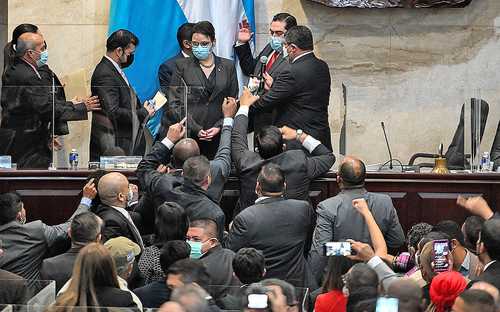 ▲ The Honduran Minister of the Interior, Leonel Ayala, swears in Jorge Cálix as president of Congress, amid protests from members of the Free Alliance. Cálix was proposed by 20 dissident deputies from the coalition that supports the elected ruler, Xiomara Castro. Photo Afp

Tegucigalpa. The leftist president-elect of Honduras, Xiomara Castro, announced last night the expulsion from her party of 20 deputies who opposed the candidate she had nominated to preside over Congress.

By unanimous acclamation we unanimously resolve and approve, in an extraordinary way, to declare the definitive expulsion of the dissident deputies, Castro affirmed after an emergency meeting of his party called after the setback suffered in Congress, which will be chaired by an opponent, proposed and accepted by the deputies who belonged to the Free alliance of the elected president, but who expressed their change of position since last Thursday.

Yesterday, the Honduran Congress inaugurated its 2022-2026 legislative work with the election of its provisional directory in an episode of blows, shouts and shoves unleashed by the rebellion of a group of deputies from the party of the elected president, Xiomara Castro.

The brawl began after the Minister of the Interior, Leonel Ayala, opened the session and 20 parliamentarians from the Libertad y Refundación (Libre, left) party proposed Jorge Cálix as provisional president, violating a pact with the allied political force.

Ayala called Cálix, one of the dissidents, up to the board of directors and swore him in. Amid the cries of traitors and Xiomara, seven legislators loyal to Castro climbed up to attack Cálix and forced him to flee.

The representative of Libre Rasel Tomé denounced that Ayala, of the ruling National Party (PN, right), illegally gave the floor to the group of dissidents who betrayed the mandate that the people gave to Xiomara Castro in the elections.

Ayala told a local television station that Cálix’s election was accompanied by 83 signatures. For the election of the leadership of Congress, 65 seats are required.

With Calix in the presidency of Congress, the National Party, having been defeated at the polls, manages to maneuver and gain control of the National Congress, said the analyst and professor at the National University, Eugenio Sosa.

The leader of Libre, Gilberto Ríos, declared that behind the 20 parliamentarians are organized crime, financial power, drug trafficking and teams that plunder state resources, who want to stop Castro’s projects against corruption and impunity.

The crisis within Libre broke out on Thursday night, when Castro – who won the PN candidate, Nasry Asfura, in the November 28 elections – summoned the 50 deputies of his party to ask them to support Luis Redondo. as president of the Legislative, but 20 did not attend.

“The absence of the 20 deputies is the omen of a counterrevolutionary betrayal of the Honduran party and people that overthrew the narco-dictatorship (…) by imposing a plan by the corrupt elite led by (current president) Juan Orlando Hernández,” he declared. the elected president after Thursday’s meeting.

Castro won the elections with the proposal to promote social transformations that rescue the country from poverty, corruption and drug trafficking that infiltrated the structures of the State, which has been well seen by the United States by favoring its anti-immigration policy.

The elected president prevailed with an alliance between Libre, coordinated by Manuel Zelaya –her husband and former president who was overthrown in 2009– and the Salvador Party of Honduras (PSH), of former candidate Salvador Nasralla. One of the alliance’s commitments was to name Nasralla vice president and hand over the presidency of Congress to him. Nasralla proposed Redondo for that position.

The twenty deputies who rebelled violated Libre’s agreement with Nasralla by ignoring Redondo and proposing Cálix so that the opposition controls Congress.

Castro accused the dissidents of betraying the constitutional agreement and making alliances with the PN’s representatives of organized crime, corruption and drug trafficking, he stressed.

The expulsion of those who betrayed (…) the refoundation project of our country promised by Castro is in order, Zelaya published in a tweet.