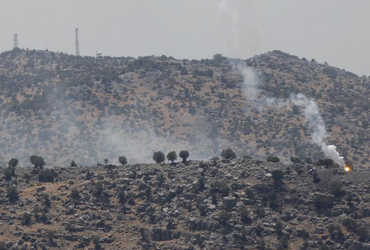 Beirut, Ta. 3
Israel strikes a Hezbollah camp in Lebanon The Iranian-backed terrorist group Hezbollah has since fired 15 rockets at Israeli military targets. The rocket attack has again raised tensions on the Lebanon-Israeli border.
Hezbollah fired 16 rockets at an Israeli military base on the Lebanese border. Hezbollah said the rockets were fired in response to Israeli air strikes. The Israeli military also acknowledged that 15 rockets were fired at military targets, but the Iron Dome defense system destroyed the rockets and there were no casualties.
UN peacekeepers have been deployed along the Lebanon-Israeli border. Peacekeepers admitted that Hezbollah fired rockets after Israel’s air strikes. Rocket attack has been reported to have caused fire in open areas of northern Israel. Israel is claiming to have bombed again after the rocket attack. Peacekeepers said the situation was again getting tense due to attacks from both sides. The UN appealed to both sides for a ceasefire.
Israel’s Defense Minister said that Israel is ready to respond to any kind of attack by Iran. Israel has blamed Iran for the drone attack on an Israeli ship off the coast of Oman. Iran denied this. Tensions between the two countries in the Gulf have hit the Lebanon-Israeli border.