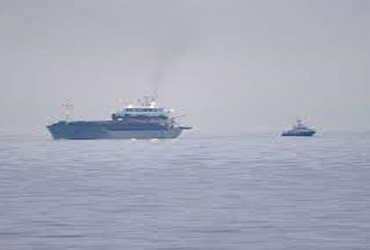 The storm cut power to thousands of homes in the Nordic region: the western Netherlands was also affected by the storm.

The Hague: A shipwreck in the hurricane-hit North Sea off the coast of the Netherlands. Due to which a vessel was filled with water. An emergency services officer said in a statement that rescue operations were underway on the affected ship.

Edward Zwister, a spokesman for the Royal Dutch Lifeboat Company, said a cargo ship named Juliet D collided with another ship. There were 18 crew members on board the ship. However, all these 18 crew members have been rescued with the help of helicopter.

The second ship was also damaged but was able to sail. A spokesman for the Dutch Coast Guard said all 18 crew members aboard the damaged ship were rescued by helicopters. The Coast Guard, however, did not give further details about the rescue operation.

Edward Zwister said the Juliet D cargo ship was damaged and flooded, putting the lives of 18 crew members on board in danger.

However, they were rescued by helicopter. Thousands of homes in the Nordic province were without electricity due to storms at sea. The storm also affected the western Netherlands. Many trees were uprooted there.