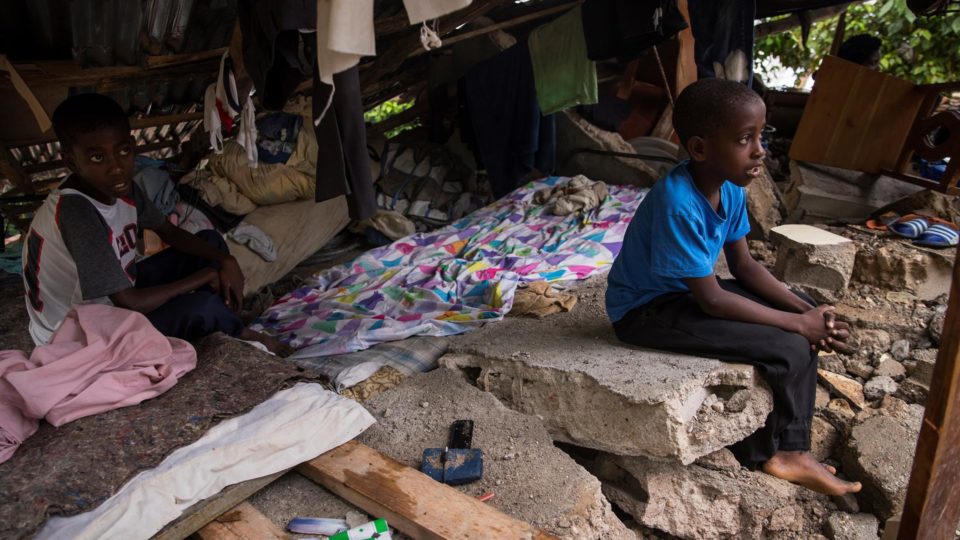 Children remain protected in the remains of their home as rains from Storm Grace are recorded in Camp Perrin, Haiti on August 17 | Photo: EFE / Orlando Barria

Heavy rains have fallen in recent hours in southwestern Haiti, the area most affected by the 7.2 magnitude earthquake on the Richter scale which killed more than 1,400 last Saturday and 6,900 injured.

Tropical Storm Grace dumped heavy rains in the area overnight and early in the morning, but on Tuesday morning only light rains persisted in the town of Les Cayes, which was hit hardest by the earthquake.

Thousands of buildings have collapsed in Les Cayes and other towns in the region, where authorities estimate 60,000 people have had to flee their homes as a result of the damage.

Civil protection reported that despite the rains, relief operations continued to search for survivors among the rubble. Today, 16 people were rescued from the rubble of the former headquarters of the troops of the United Nations Stabilization Mission (MINUSTAH) in the town of Brefèt in Les Cayes, and nine bodies were also found.

Grace, which crosses the Caribbean towards the Yucatan Peninsula, was approaching Jamaica today after heavy rain in Haiti, according to the National Hurricane Center (NHC).

Grace’s rains can still cause flooding and landslides in parts of Hispaniola (Dominican Republic and Haiti), although the storm has already moved towards Jamaica, with maximum winds of 75 km / h.

The powerful earthquake recorded last Saturday left 1,419 dead and 6,900 injured, mainly in the southwest of the country, according to the latest official report. In addition, it also destroyed around 37,300 homes and caused structural damage to 46,000 others, in addition to 25 medical centers.

The United States will send eight helicopters to Haiti to boost rescue and humanitarian assistance efforts in the Central American country. The American government is committed to supporting the Haitian, through the coordination of the United States Agency for International Development (USAID, for its acronym in English) and with the support of the Disaster Response Assistance Team ( DART).

A total of 65 specialists were sent in search and rescue work, in addition to a large amount of support equipment and medical supplies, which are already in the areas most affected by the earthquake.

The eight helicopters will join US Coast Guard ships that have already been deployed to the region. USAID Director Samantha Power said that in the past few hours, relief teams sent by the United States have managed to transport 40 seriously injured people to hospitals in the capital Port-au-Prince. from Haiti.

The United Nations (UN) has allocated $ 8 million (approximately R $ 42 million) in emergency humanitarian aid to people affected by the earthquake in Haiti, its secretary general, António Guterres said on Tuesday. In a statement, Guterres said the earthquake destroyed or damaged thousands of homes, as well as hospitals, schools, churches, bridges and roads, and stressed that “humanitarian needs continue to increase in Haiti”.

“The UN team on the ground is working with the government to help ensure that aid and humanitarian personnel can reach those in need,” the UN secretary-general said, noting that disaster assessment and coordination teams are on their way from the country.

The Portuguese diplomat said the US $ 8 million was spent on providing essential health care, clean water, emergency shelter and sanitation. According to Guterres, the last places to receive aid were Les Cayes, Jérémie and Nippes in southwestern Haiti.

“We will continue to increase our response to the most affected areas, even as Tropical Storm Grace approaches Haiti with the threat of heavy rains and flooding,” the UN chief said, urging all countries to support Haiti to avoid “a humanitarian catastrophe”. Finally, Guterres promised to continue supporting Haitians to emerge from the crisis. “I have a message for the Haitian people: they are not alone. We will be by their side and support them at every step of the way out of this crisis, ”he said.

Aid to Haiti will also come from Spain, which will send 10 tons of medical supplies and contribute 250,000 euros (approximately R $ 1.6 million) to address the humanitarian crisis in Haiti.

The aid will be channeled through the Spanish Agency for International Cooperation for Development (Aecid) to respond to the request of the Haitian government and the International Committee of the Red Cross (ICRC) and Red Crescent (ICRC), said Tuesday the Ministry of Relations. Exterior.

In addition to the health and financial response, Spain will support the management of water purification equipment previously provided by the Spanish Cooperation, in order to supply the most vulnerable populations and thus prevent the spread of diseases such as cholera. .

From the first moment of the emergency, the Aecid Humanitarian Action Office has been in contact with the Spanish Embassy in Haiti, as well as with the Aecid Technical Cooperation Office in the country to assess the situation. and any decisions to help the population in this emergency. .

Haiti is considered in the Master Plan of Spanish cooperation as a partner country, including it in the group of priorities, with actions focused mainly on the sectors of water and sanitation and education.